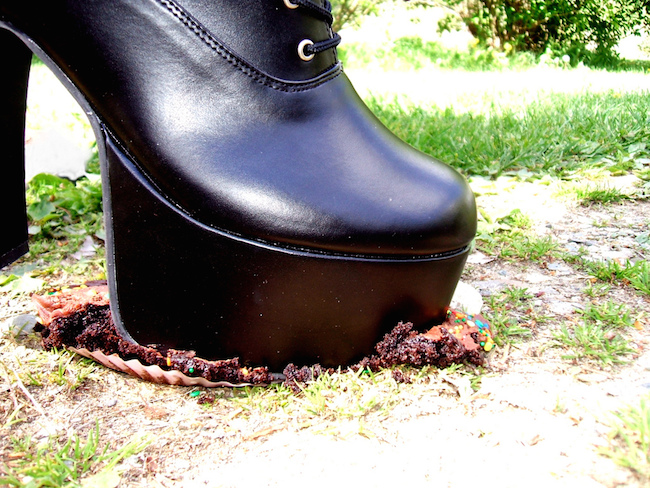 After listening to “Flawless” five times, Evette went to the mirror, and told herself the lyrics in the Beyoncé song were true.

She believed it. She internalized it. She embodied it.

Ready to dominate, Evette strutted over to her computer to fire off a blog post. A post that would enable her to claim her rightful place atop her industry.

You’ve met an Evette before, right?

Someone who thinks she’s so flawless, all she has to do is show up and everyone will bow down to her.

But it doesn’t quite work that way. Not for the Evettes of the world. And not even for Beyoncé.

As a result, instead of showing the world she’s a rock star like the Queen Bey, Evette ends up looking more like this.

The blueprint for dominating your industry

As talented as Beyoncé is, it’s tempting to believe that she does indeed just wake up flawless.

But the Queen Bey is human. Just like you and me.

The difference between Beyoncé’s mega-success and yours is a matter of executing the right game plan to make the most of your abilities and opportunities.

That’s what Evette is missing.

So if you want to dominate your own industry, follow this Beyoncé-inspired, seven-step blueprint for consistently crushing your competition.

1. Stand on a soapbox

Women’s empowerment has been a consistent theme throughout Beyoncé’s career. Through songs like “Independent Women Part One” with Destiny’s Child, to “Run the World (Girls)”, and “Flawless” as a solo artist, the singer has a long history of touting girl power.

The self-proclaimed “modern-day feminist” also has a 10-piece, all-woman band dubbed The Sugar Mamas. Her motivation for forming the band was to inspire young women to get involved in music.

Beyoncé’s commitment to promoting women even led her to write a piece on gender equality in The Shriver Report earlier this year.

If you want to dominate, you must elevate your tribe.

Lead them. Empower them. Make them better off for having you in their world. To strengthen your tribe, you must stand for something bigger than the products or services you offer.

The Tory Burch Foundation provides small business loans, mentoring, and entrepreneurial education for women. Tory was recently named an Ambassador for Global Entrepreneurship by the Obama administration because of her commitment to her cause.

What do you do to elevate your tribe?

2. Practice until your feet bleed

On Day One, Beyoncé wasn’t the amazing rock star she is today. She’s put a ton of work in over the years honing her craft. At times, she even practiced her choreography until her feet bled.

Even though she’s long-passed the 10,000-hour mark in performing, Queen Bey still puts in major work to keep growing.

Beyoncé constantly works and reworks her act, watching every two-hour performance on tour — even after the hundredth appearance — taking notes on how to improve.

If you want to dominate, you must work harder than most people are willing to work.

You must put in the work on the key things that propel you beyond your peers. Even when you don’t feel like it. Even when you’re already pretty darn good.

Jon Morrow stuck to an insane practice schedule early in his blogging career. Even while toiling away as Associate Editor at Copyblogger, he wrote 100 headlines a day, every day, for a year to master the art. In addition, for years he wrote at least 2,000 words per day.

As a result, he’s one of the most popular bloggers around.

What do you do to improve your craft?

Few others are able to do what Beyoncé does. Her knock-out performances, complete with strong vocals and epic dance moves, leave audiences spellbound and leave other artists struggling to compete.

Even with all that performance power, Jody Rosen in The New Yorker described the weirdness of Beyoncé’s music as her true point of differentiation:

She is such an effortless entertainer, such an unerring singer and hoofer, that it’s easy to overlook her music’s defining quality: strangeness. Beyoncé is an eccentric, a vocalist with truly weird and original melodic and rhythmic approaches. Listen to the slippery rap-style syncopations in ‘Say My Name,’ to the melodies that float and dart over the thump of ‘Single Ladies,’ to the jarring timbral and tonal variations in ‘Ring the Alarm’ and ‘One+One’. Those sounds didn’t exist in the world before Beyoncé. If they sound ‘normal’ now, it’s because Beyoncé, and her many followers, have retrained our ears.

If you want to dominate, you’ve got to be strange.

You can’t be another lame “me too” version of all the other businesses in your industry. You’ve either got to do different activities, or do the same activities in a different way.

Need further proof that people like weird? This episode of Marie TV has more than 350 comments and 1,300 social shares.

What makes you the type of weirdo your customers can’t live without?

Beyoncé has also successfully managed her brand. The singer’s hand is in almost every detail of telling her story to the world. Like that time she wrote, directed, and produced a documentary about herself.

At the core of her brand, she has established herself as a prolific entertainer. With 10 studio albums under her belt, she’s maintained a steady presence in front of her audience.

She also stays present in front of her fans via a well-curated Tumblr account and through behind-the-scenes videos of performances.

After establishing herself as a strong force within the music industry, she expanded her empire through movies, merchandise, a clothing line, perfumes, and tons of endorsements.

If you want to dominate, you must shape and tell your own story.

Take control of your reputation by actively managing your brand. Position yourself for growth by consistently telling your story through action and message, regardless of the medium.

What is the story you communicate about your brand?

Beyoncé’s career started off as part of Destiny’s Child. Upon launching her solo career, she formed an even stronger alliance when she began dating and later married rapper Jay Z.

This past summer, the entertainment power couple, with 36 Grammys between them, made their partnership work harder for them with their “On the Run” tour. Tickets for their co-headlined performances sold for 44 percent higher than their individual tours.

If you want to dominate, don’t go it alone.

Collaborations are game changers. Brian Clark has noted that the relationships he’s developed while building Copyblogger have made the difference in his professional life.

You’ll get further much faster when you have a crew of fantastic people around you to propel you toward your goals.

What can you do today to strengthen your network of rock stars?

Part of staying at the top of your game involves continually changing the status quo. Innovations that get people talking.

Like performing a live concert fewer than five months after giving birth, or filming a star-studded fake movie trailer to promote your upcoming concert tour.

Or releasing a surprise visual album with no promotion.

Beyoncé has delivered countless surprises in her 15 years on top of the music world, but she’s never dropped a bombshell like this. The Queen Bey woke the world in the midnight hour with a surprise ‘visual album’ — 14 new songs, 17 videos, dropped via iTunes with no warning. The whole project is a celebration of the Beyoncé Philosophy, which basically boils down to the fact that Beyoncé can do anything the hell she wants to.

The visual album generated over 1.2 million tweets in 12 hours and more than 800,000 copies sold worldwide in three days.

If you want to dominate, don’t play it safe.

Entrepreneur Chris Guillebeau traveled to all 193 countries in the world by age 35. He also hosts the annual World Domination Summit.

Coincidence? I think not.

What type of epic project will you work on to get people talking about your business?

7. Transform yourself into a dominator

Beyoncé didn’t start off with a domination mentality. Like many, she initially approached her career with a “work hard, and all my dreams will come true” attitude.

I thought of this performance, which was a real defining moment in my life as a child. In my mind, we would perform on Star Search. We would win, we would get a record deal, and that was my dream at the time. There’s no way in the world I would have ever imagined losing as a possibility. You know I was only nine years old, so at that time you don’t realize that you could actually work super hard and give everything you have, and lose. It was the best message for me.

It transformed her into an artist who wouldn’t be satisfied with showing up and waiting for others to pick her.

She now creates irresistible offerings that compel droves of adoring fans to eagerly line up to get a dose of whatever she dishes out.

But you don’t have to lose Star Search to be transformed into a dominator.

Decide you’re not going to be satisfied with the results of just showing up, and then follow the blueprint.

In time, your own droves of adoring fans will tell you how flawless you really are.

Strut on over to Google+ and let me know which part of the blueprint you’ll start today to begin your transformation.

Sonia Thompson is the founder of TRY Business where she's on a mission to help entrepreneurs build businesses that ooze awesome. Jump on her free eCourse on how to get your customers to love you.

Previous article: Why You Must Not Ignore The Call to Adventure
Next article: Which of These New WordPress Themes is Right For Your Audience?