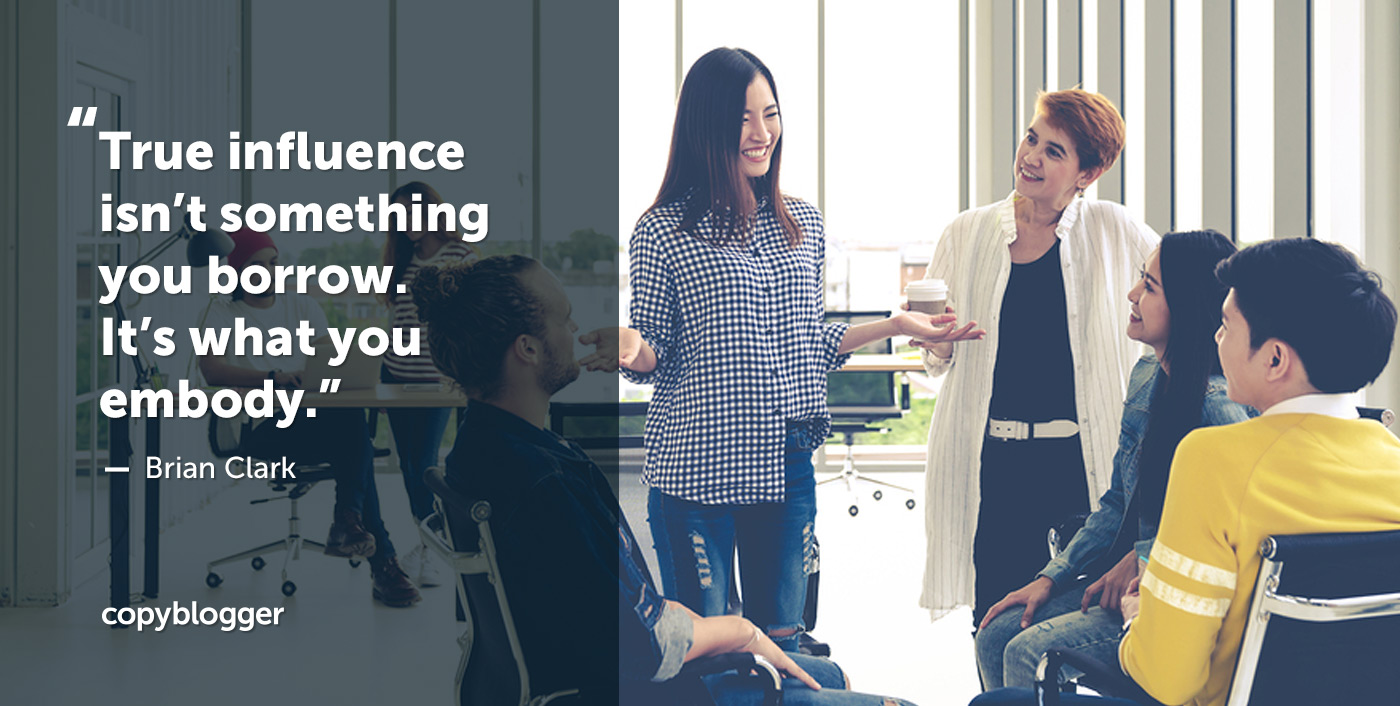 Ever see a numbered headline like the one above and try to guess what the three things are?

Sometimes it’s easy; sometimes it’s not. In this case, you could be thinking I’m going to talk about content, copy, and email marketing tips.

And while you’re right that those things are important, that’s not what this article is about.

Content and copy contain the messages you need to get across, and email delivers those messages within a conversion-rich context. But without understanding the fundamental elements of those messages, you won’t create the kind of influence with your target audience that leads to sales.

With companies of all sizes rushing to embrace “influencer marketing,” it seems that many have given up on the unique power the internet provides to form direct relationships with prospects.

Instead, they’re trying to avoid the work by reaching the audiences of people who have already put in the work. That continues to put you at the mercy of others when you could instead own the relationship.

Despite the disintermediated nature of the internet, brands are instead turning to a new form of intermediary, or influential middle man. Shortcut marketing rears its ugly head again.

Now, don’t get me wrong — having relevant influencers in your corner is desirable, and often game-changing. That said, your main goal is to first develop direct influence with your prospects, which ironically makes it easier to get outside influencers on your side.

This is the reality of modern marketing in any medium, and it’s especially viable online. And those three key elements that your digital marketing must embrace to develop true influence are aspiration, empowerment, and unity.

Effective marketing has always been about identifying and fulfilling aspirations. People strive to improve themselves and their station in life, especially in relation to others in the social strata.

Early mass marketing did a great job of channeling aspiration through envy. Messages encouraging consumers to “keep up with the Joneses” through the accumulation of material goods became the persuasion prompt for elevated social status.

Aspiration remains as powerful as ever, but it’s a different animal now. First of all, we no longer compare ourselves to our geographic neighbors. Instead, we now have worldwide Instagram-fueled expectations based on who we desire to be like based on interests, lifestyles, and various forms of success.

“Show me what a person admires, and I’ll tell you everything about them that matters. And then you’ll know how to connect with them.”

Paired with that is a pronounced reduction in the desire to accumulate material things. According to this Trend Watch report on consumerism, status is shifting away from markers of material wealth — what they have — and moving more toward who they want to become.

This shift is amplified by celebrities and other influential people on social media. Their followers want to be healthier, smarter, creative, connected, and entrepreneurial. If you’re selling material goods, you need to understand how your widget fits into the broader aspirational lifestyle of your target audience.

This alone seems to justify the focus on outside influencer marketing, but it’s really just a way of abdicating your responsibility as the shepherd of your products and services. As Eugene Schwartz famously said decades ago:

“You do not create desire for your product. You take an existing demand in the market, and you channel it into your products.”

The desires and aspirations of your ideal customer are out there — in plain view — thanks to a social medium that publicly identifies who people admire and follow. It’s your job to discover the parameters of that aspiration, and channel it toward your product or service.

If you know what a prospect aspires to become, then your product or service and your marketing must empower that person to become a better version of themselves. If you fail across that spectrum, you’ll lose out to a competitor who delivers.

The 20th century was fueled by inadequacy marketing that encouraged material accumulation. Without access to alternative perspectives, people were targeted by marketers with messages that positioned the brand as the hero, promising to save the poor prospect from the anxiety manufactured by the message.

If your neighbor had a new Buick, you were now made to feel lesser in terms of social status. Why not upgrade to a Cadillac and take the lead?

Effective modern marketing flips that approach on its head. Rather than appealing to materialism or base self-interest, people are looking for positive inspiration and pragmatic guidance on how to become their best selves.

Pair that with the fact that the internet in general (and social media in particular) have helped erode trust in traditional institutions, while shifting power to engaging individuals. The appeal of attracting influencers with strong personal brands reflects this trend — people want to be empowered by other people, not faceless corporations.

Why not also put a human face on your own company? Again, what’s going to get an influencer excited about pimping your stuff, if your brand is uninspired to begin with?

This can be as easy as flipping your perceived role as a marketer. Whether you want to think of yourself as a guide, mentor, or coach, it’s your job to empower the buyer’s otherwise self-directed journey.

In an environment ripe with information and choices, the prospect is in charge. And while they may not look like a hero yet, they’re definitely the protagonist of their own story.

That means they’ll follow and choose to do business with the brand that empowers them to achieve their heroic aspirations. Outside influencers can help, but only as long as you’re also developing direct influence within your market in a meaningful way that establishes that you’re a player.

For decades, smart marketing and sales professionals have worked to incorporate the six fundamentals of influence established by social psychology studies — reciprocity, authority, social proof, liking, commitment and consistency, and scarcity — into their persuasion efforts.

So it was definitely news when Dr. Robert Cialdini, the original definer of those fundamentals, added a seventh — unity.

In reality, it wasn’t that much of a surprise. Books such as 2004’s The Culting of Brands by Douglas Atkin, and Seth Godin’s Tribes from 2008, provided earlier reflections on the power of unity influence. Meanwhile, companies such as Apple and Harley Davidson have used the power of belonging to build brands worth billions.

Smart digital marketers knew what was up, but we simply tried to shoehorn the concept into the existing influence principle of liking. That means people are more readily influenced by people they like and otherwise find attractive.

But unity goes way beyond simple liking. From the prospect’s perspective, it’s more about people like me or even of me.

According to the same Trend Watch report, people now trust people like themselves more than representatives of traditional power centers, and as much as academic or technical experts.

To me, that makes unity perhaps the most powerful of the (now) seven fundamental principles of influence.

Take authority. It’s no longer enough to just demonstrate your expertise with content. You need to be the relatable authority that also shares the core values and worldviews of your prospects.

Or consider social proof, which means we look to others for indications of value and how to behave. A Breitbart article may get tens of thousands of social shares, and yet that social proof is meaningless — and actually a negative — to those who do not share the values and worldviews of that crowd.

There are a lot of tribal ways that we unify. Family, neighborhood, city, province, and nationality are obvious. But the more powerful forces of unification from a marketing standpoint are interest, aspiration, and empowerment. You need to lead people with similar aspirations in a way that brings them together even more.

Thanks to the internet, it’s never been easier for anyone to locate like-minded people who share their interests and aspirations. And as Godin pointed out repeatedly in Tribes, they’re also looking for like-minded leaders to provide the empowerment.

Stand for something that matters

To the contrary, it’s bold positioning, motivating manifestos, persuasive writing, and innovative mission statements that inspire people to confidently chase their aspirations. And it’s no coincidence that these are the same sort of messages that spread like wildfire through social media.

Empowering content that matches aspirations and validates worldviews is what those coveted influencers use to build audiences. You must do the same to build trust in relationships and remain in the game.

Traditional wisdom says to hide behind a carefully crafted brand, powered by safely sanitized messages, in the hope of appealing to everyone. But if a prospect can’t see themselves belonging with your brand, they’ll look for — and find — someone who does make them feel like they belong by standing for something that matters to them.

True influence isn’t something you borrow. It’s what you embody.

Previous article: Fear of Selling? How Introverted Writers Transform into Business Professionals
Next article: How to Motivate People to Buy