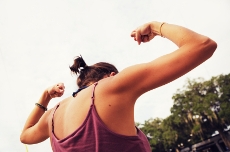 Building a business while fighting your fears is no picnic.

Holy moly, who’d want to have a picnic with those guys around?

Left to their own devices, those fears will hinder your ability to build the successful, profitable business that you want. But when you build enough self-confidence, you’ll be more than a match for any fear or challenge you’re faced with.

That’s how your business will grow, and here’s how it works.

How do you get to Carnegie Hall? By having the strength to keep going when it’s easier to give up.

OK, practice is important too (and a funnier line).

Most people get 90% through a project and then either finish it or quit. By that point it’s probably “pretty much there” and “not bad at all.”

Sometimes it’s appropriate to go ahead and “ship” at that 90% point. But not if you want to create something extraordinary. And extraordinary sells — it’s the last 10% where the magic happens.

The last 10% of the most worthwhile endeavors is where you need to dig deep and find the spark and the faith to keep you going. This requires a deep-rooted trust that you can do it. It requires that your confidence in your capability is greater than the challenge ahead.

Going the extra mile when others might give up is what separates good from great.

2. You’ll do what matters

Recognize any of these?

This is just a tiny sample of some rules that you may have set for yourself.

Whether you recognize these examples or not, you’re sure to have a bunch of expectations about what you can and can’t do, should and shouldn’t do, must and mustn’t do.

Added to that, you have expectations about what other people can and can’t do, should and shouldn’t do, must and mustn’t do.

And most brain-numbingly complicated of all, you have expectations about what other people expect of you.

True success comes from engaging with the things that matter to you and taking continued, meaningful action. But that’s only possible if you sweep aside the rules and expectations that don’t serve you.

Set aside the rules that don’t make sense, and make a firm decision to engage with something that has personal meaning — on your own terms.

Until you calm your relationship-building demons and give yourself room to do it in ways that work for you (and your business), you’ll continue to struggle.

You’ll draw back from reaching out to people because you’re scared of being judged or rejected. Or you’ll second-guess yourself. Or step into a role that doesn’t fit, and end up with a performance that just isn’t convincing.

Natural confidence means that you don’t need to worry about approval or how you’re coming across. You’ll be able to connect naturally using the best of yourself … not in a big, shouty, look-at-me kind of way, but in a way that honors who you are and what you can do.

When that voice of fear or doubt rises inside you and tells you that your plan is too risky, what do you do?

The vast majority do exactly what that voice tells them to do: Nothing.

Most people choose safety and comfort over risk and discomfort. But that’s not where you’ll do your best work.

Your best work requires that you have to step beyond the confines of what you know, what you’ve done, and even who you know yourself to be. Sometimes you have to scare yourself silly in order to play a bigger game and participate in something amazing.

Of course you’ll be scared. Without inventing the flux capacitor and going into the future, you don’t know how things will work out. Uncertainty always creates some fear.

But natural confidence gives you the ability to trust yourself. Even though you might be trembling in your boots, you can step into the unknown with a deep trust that you can deal with whatever happens — good or bad.

Have you ever said “Yes” to something because it’s easier than rocking the boat by saying “No”?

Because you wanted to keep someone happy?

Because you thought it was expected of you?

But there’s only so much of you to go around, and everything you spend time on is time that you’re not spending somewhere else. For everything you say “Yes” to, you’re saying “No” to something else, and in your business this equation is critical.

I’m not suggesting you turn into a selfish jerk. Generosity is a rare commodity, and something to be encouraged. But only if it’s in the right spirit.

Saying “Yes” to stay out of a conflict, to please the other guy, or to receive validation is the wrong spirit.

Self-confidence means that your value doesn’t depend on how much other people approve of you.

It means you can make deliberate, enlightened decisions about what you do and where you spend your time, based on your priorities and values instead of your insecurities.

6. You won’t be fixated on success

It’s natural to want to succeed in what you’re doing. Otherwise you wouldn’t be here. But what if that focus on “success” was actually hindering you rather than helping?

See, success is the wrong motivator. It’s often based on extrinsic factors, the things you think success can deliver.

For you, it might be the feeling that you’ve “made it.” Maybe it’s the absence of worry. Maybe it’s respect and admiration. Or maybe it’s being able to travel first class, buy that shiny car, or eat at the best restaurants.

If you know what real success means for you, that’s great, but you’re in the minority.

Many chase an idea of success that they’ve patched together from what they’ve read, observed, or think they should be aiming for.

If you go after a muddled construct of success and place your self-worth on achieving it — ”If only I can get there, everything will be so much better” — you’re setting things up to be a struggle. And you’ll only feel disappointed and disconnected when (and if) you get there.

The fact is that success comes and goes just like failure does. So shouldn’t your self-worth depend not on the outcome, but on the way you play the game?

Instead of chasing success, take continued, meaningful action. Two things will happen. You’ll vastly increase the chances of experiencing real success in your business, and you also make sure it feels great when you get there.

7. You’ll always be ready to make the next decision

Building any business requires a constant stream of decisions. Sometimes those decisions will work out and sometimes they won’t.

Ask the world’s leading entrepreneurs and business leaders. They’ll tell you that failing is as important as succeeding in building anything worthwhile.

Without self-confidence, it’s easy to take screw-ups personally and to let them affect your thinking.

But the fact is that screw-ups are only a big deal if you decide they are. A great business is one that engages with the decisions it needs to make.

If you trust yourself to make decisions, then you don’t need to retreat, beat yourself up, or reinforce a negative self-image if something doesn’t work out. You’re always ready to make the next decision, no matter how this one turns out.

Previous article: How to Publish Your Book in the iBookstore
Next article: Copyblogger Weekly Wrap: Week of October 18, 2010