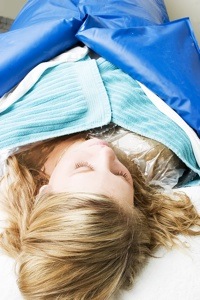 I’m going to keep this week’s intro brief because my dog is biting me.

My mother says he bites us all because he’s herding us (he’s a collie mix and barks and corrals when anyone runs), but I think it’s because he wants to be on the winning side. If anyone is play-attacking anyone else, he bites the person being attacked. He’s kind of an ass that way.

So it really can’t bode well that I’m being harassed while writing the Wrap. Speaking of ass, it’s just like that time he bit Jennifer Lopez while she was busy working on Gigli.

Now for the part where I massively fail to tell you what happened this week on Copyblogger (with bite marks):

Sometimes the person asking to “pick your brain” isn’t a zombie, and when that happens, you’re really in trouble. Rather than awkwardly stumbling through a conversation containing sentences like, “But my brain is supposed to make me money, you freeloader!”, Laura Roeder has better ways to deal with sticky situations.

Captivate Your Readers with a Marketing Story that Sells

Let me tell you a story: There once was a guy named Johnny, and he had the very unprofitable hobby of writing stories. Then he discovered that if you can learn to tell your own true story in business, you can make money… so he did just that, and taught others how to do it, too. Then he hooked up with seven Victoria’s Secret models and lived happily ever after.

Apparently there’s this newfangled trend out there in the Interwebz called “being organized.” The way I read this, some people actually plan things out on a calendar and do NOT blog totally randomly. Apparently this crazy new trend has some advantages that you can read about in this post, like “knowing what the hell you’re doing.” Hmm. Interesting.

Brian Clark will be speaking at the BlueGlass Internet Marketing conference in Florida November 2-3, and at PubCon Las Vegas on November 8-11. That’s pretty much it. Not funny enough? Okay, imagine him speaking in a clown costume.

Blogging with a Learner’s Mind

This post made me think of how people say that kids pick up languages naturally and well, and how my response is, “If you were content to just say stupid and incorrect things and had people tirelessly correct you for months until you got it right, you’d be good at languages too.” Pamela says it best: “A learner’s mind is fearless.” Learn to lose that fear and be content to learn over time and your blogging will become so much more awesome.

About the Author: Johnny B. Truant specializes in selling through stories and would like very much to set you up with a cheap blog or website. (That’s “cheap” as in “inexpensive,” not as in “tawdry.”)