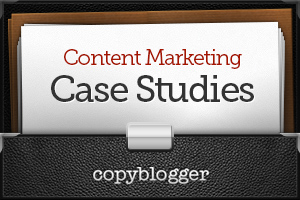 I discovered Torre DeRoche’s fun and exciting blog a few years back, when she was in the process of self-publishing her book, Love with a Chance of Drowning.

Since then, Torre has taken the international publishing world by storm.

Shortly after she self-published her book, Torre was “discovered” by film producers and publishers via social media, and negotiated lucrative book deals with Hyperion (in North America) and Penguin (in Australia). A film adaptation of her story is also in the works.

I’m delighted to report that her book is one of the most fun, inspiring memoirs I’ve ever had the pleasure of reading. Pick it up today, and enjoy the ride.

Today, Torre joins us here for a Copyblogger Case Study, to share her story of love, independent content production, adventure, and fear …

What’s your website, and what do you write about?

My website is FearfulAdventurer.com. The name says it all: it’s about fear and adventure, but not just travel or sporting adventures; I also cover topics like writing, pursuing dreams, or falling in love. In other words, anything that’s simultaneously exciting and terrifying.

Through honest, irreverent, and occasionally cheeky storytelling, I discuss the emotion of fear, hoping to coax readers towards the daring leaps that inspire them.

I have the same theme in my book Love with a Chance of Drowning, which is my own story of facing fears to follow my heart.

Who are your readers and how do you serve them? Was there a pressing problem you were trying to solve?

I used to believe that adventurers were a rare breed of super-humans made up from titanium bones and veins pumping with Viking blood. I avoided adventure because of this false assumption, believing that I wasn’t born with the brawny, invincible DNA that’s required for gutsy pursuits.

Through chance encounters, I was offered the opportunity to sail the Pacific on a leaky boat for two years, and, despite my morbid fear of deep water, I jumped aboard (love can make you do crazy things!). I hid my fear like a dirty little secret until I began to realize that everyone out there sailing the world is afraid! Turns out, even adventurers are not fearless.

Through my blog and my memoir, I want to take the shame out of fear and call bluff on those claiming to be fearless.

My audience is anyone who has ambitions that are bigger than their comfort zone, people who want inspiration, or those seeking reassurance with their fears.

“No fear,” is a pipe dream developed by a sporting company to sell wares to daredevils, but the only people who truly have no fear are dead.

My story of facing my own fears is the most important piece of content in my business, captured in my memoir Love with a Chance of Drowning.

My blog is my second most important vehicle for reaching readers.

What resources or tools did you find most helpful when you were getting started?

This reply will probably sound like it should be accompanied by Tibetan singing bowls, Om chants, and the smell of burning incense, but here goes …

My intuition is always my number one resource when I’m getting started with anything. I could tell you that my WordPress theme, Twitter, and Facebook were helpful, that reading countless books and websites on blogging and publishing were valuable, or that Jenny Blake’s amazing book marketing spreadsheet offered direction, but these tools and resources were all secondary to my intuition.

Everything from our imaginations is being created for the very first time, and while it’s possible to seek loose guidance along the way, people can easily become lost if they’re too reliant other people’s strategies. If you follow someone else’s course too closely, the only place you’ll end up is a destination that’s already been discovered.

What was your situation before you started blogging? Were you always a business owner, or did you have a more traditional career?

I’ve worked full-time in several design studios in Melbourne and San Francisco. I didn’t mind that work — design studios tend to be pretty easygoing and fun — but running my own business from home freed up time for writing and creative play.

When I had momentum with my first draft, I put all other work on hold to get the manuscript finished. Once that was done, I started fearfuladventurer.com as a way to put my work out there, build an audience, and sell my book. It worked! My book sold to publishers after eight months of blogging.

Nowadays I mix my freelance design work with my writing career.

How do you use social networking in your business?

I know this sounds mega-geeky, but I see Twitter as a huge, virtual party. In the comfort of my home (and often while wearing a robe!), I get to go around and shake hands, and meet interesting, generous, inspiring people. It’s an exciting place to be, because sometimes, incredible serendipitous meetings happen, like this:

A Hollywood film producer discovered my freshly self-published book in his news feed one day. He clicked through to an excerpt on my blog, and then sent me a Twitter DM: “Are the film rights to your book still available?”

At about the same time, a UK publisher found my book through a Facebook group, and she also put in an offer to buy the rights. These two offers gave the book buzz, which triggered interest from several publishers.

Because of these chance encounters, I ended up selling to Hyperion in a six figure preemptive offer, to Penguin at auction in Australia, and to the UK publisher who found me through Facebook. It has also sold to a Brazilian publisher as well as Brilliance Audio. Crazy.

What were some of your main tipping points or “a-ha!” moments? How did they come about?

Just before I self-published, an agent in New York, who was considering my manuscript, said, “I have a stack of great stories on my desk, but publishers aren’t buying memoirs right now.” Maybe I was arrogant, but I thought: My story is good, dammit, and I’m going to get it out to readers!

I believed in my book, which I’d worked tirelessly on for years, and I didn’t want to carry on with an agent who had given up before we’d even begun.

I decided to self-publish.

I spent the next few months creating a cover for the book, a website, a trailer, and a launch plan. I self-published through Create Space and Kindle, and then pushed it through my blog and social media platforms.

A month later, two offers came to me through social media (see above). The first agent I contacted — my top choice — signed me on a few days after I pitched her, and shortly after we sold to five publishers.

I guess you could say that my “a-ha” moment was the decision to go down a non-traditional path to get to my original goal of entertaining and inspiring readers.

What were your biggest mistakes, or biggest wastes of time/money?

When I first began, I did all my own web development work. This was as enjoyable and productive as attempting my own toilet plumbing. I worked fourteen-hour days, tallying up over eighty hours to make my blog handsome and functional.

When I redesigned my blog earlier this year, I decided to fork out cash for a professional web developer. If I hadn’t stubbornly decided to do everything on my own when I started out, I could’ve spared myself from a cluster of eye wrinkles and the neck posture of a vulture.

Pay the experts, people. It’s worth every dollar.

Why do you think you became an independent business owner and blogger, when most people just stick with the career they have, even if it’s unsatisfying? What’s different about you?

I approach life with a playful, curious attitude. I suppose I live by the Oscar Wilde quote “Life is too important to be taken seriously.”

If you regard your time on earth as a chance to observe, play, and experience, why would you ever waste your days doing something unsatisfying?

My book has just released to rave reviews in Australia, New Zealand, and North America. It’s set to launch in the UK and Brazil in July. I’m still in the thick of the publicity efforts.

My blog is growing steadily as the book sells. The graphs are moving in the right direction. The film adaptation is in script development. Where I’m at today is well and truly beyond anything I’d ever imagined for myself.

What’s next for you? What are your next goals?

My next goal is a simple one: to center myself and rejuvenate. It has taken a lot out of me to get to this point and I’m feeling the need to slow down for a little while.

I have several creative goals, like making a documentary, writing fiction, studying painting, building a start-up, and traveling the world, but I’m not yet ready to begin planning another big project until the chaos of these launches settle down.

Among the mayhem, I’m finding a lot of joy in slowing down and giving myself time to notice the small, pleasant details of life, like drinking pots of hot tea while watching the winter sun peeping through the trees. I’m allowing myself the time and space to focus on now, which is lovely.

What advice would you give to bloggers and content creators who are trying to build an online audience?

I see far too many bloggers killing themselves to win popularity contests without having any idea what they’re building for. This is often accompanied by unrealistic assumptions, like: If I get thousands of subscribers, I will be rich!

But how will you get rich? What is your product? And are you in this for money or passion? I sold my book for several big advances, but I’m not rich. It took me years to get to this point and it will take me years to get to the next one. Divide that money by the required work hours and you might find you’re better off flipping burgers.

You’d better be doing this for passion, or you will burn through an incredible amount of time and energy. This is a hard game. It can be very depleting and emotionally taxing.

Blogging is a platform for launching something else. What is ‘something else’ for you? Have a clear vision of where you want to go and then align everything you’re doing with that goal. Don’t just start throwing darts into the dark hoping to hit something.

Previous article: How to Create Compelling Content that Ranks Well in Search Engines
Next article: The 3 Core Elements of Good Storytelling (And Why Your Business Needs Them)