It’s a terrifying question, but an important one. If you’re committed to building a popular and profitable site, you’ll have to write, read, and talk about your topic almost every day for the next several years. You’ll invest thousands of hours, quite literally gambling with your time.

The question is, how will you approach it? Will you start writing and hope someone notices you? Or will you carefully research your niche, looking for the precise angle that will make your content irresistible?

I’ve tried both, and I recommend the latter.

It’s never possible to know for sure whether people will like your content before you create it, but keyword research sure helps. You can see how many people are searching for your topic in the search engines, and you can use it to compare different topics to each other and gauge their popularity.

A friend of mine is thinking about starting a blog on Mixed Martial Arts (sometimes called ultimate fighting). He’s an expert in the niche, and while the sport is certainly growing, he was wondering whether anyone is looking for information online.

So I decided to look it up for him using Wordtracker. Using their Keyword Researcher tool, I searched for “mixed martial arts” and here were the first few results:

I was a little surprised:

All of that information is useful, but I know next to nothing about mixed martial arts, so I suspected I was missing something. I decided to “dig” a little further with Wordtracker’s Keyword Universe tool—a nifty little program that searches the web for related keywords. After a few minutes, it spit out the following results: 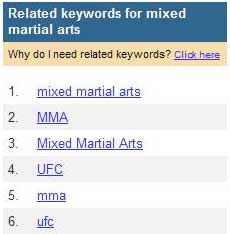 Both “MMA” and “mma” are in the search results. I’m guessing they’re an abbreviation for Mixed Martial Arts, so let’s take a look at them:

Now we’re getting somewhere! If we combine their daily search totals, nearly three times as many people search for “MMA” as “mixed martial arts.” With more people using the abbreviation than the full term, we might also infer that this audience is already very familiar with the niche.

Still, let’s back away from that for a moment and look at the sixth related keyword from above: UFC.

As it turns out, UFC stands for Ultimate Fighting Championship. It’s the name of the main mixed martial arts league, kind of like NFL for football or NBA for basketball. Let’s take a look at the traffic it receives, once again looking at both the uppercase and lowercase keywords: 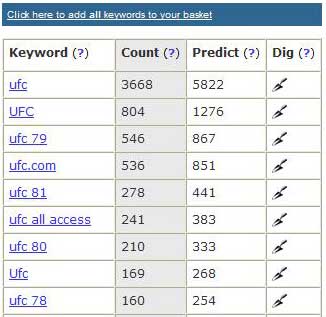 Wow! If we combine the predicted daily traffic, “UFC” is receiving 7,098 searches per day—more than seven times the traffic of “MMA.” Even longer terms with “ufc” in them, such as “ufc 79,” “ufc 81,” and so on receive significant traffic.

Having no idea what 79 and 81 mean, I searched for them both in Google, and it looks like the numbers represent individual UFC events, kind of like boxing matches. People are looking for more information on great fights from the past.

I didn’t include the full list, but some of the other popular keywords for “UFC” are “ufc knockouts,” “ufc fighters,” and “ufc videos.” Unlike the results for “mma,” we don’t see nearly as many searches for different types of gear and training.

What does that mean? Well, here’s what I think:

Is this useful information? You betcha.

In marketing, one of the most important steps you can take is to segment your audience. If you can divide them by their interests, then you can craft a message that’s perfectly targeted at the group you want to pursue. It makes it much, much easier to grab their attention.

In my friend’s case, he only wants to target fighters. He has no desire whatsoever to become just another reporter on the individual events. The purpose of starting the blog is to build his authority as a mixed martial arts expert and eventually make a living from training fighters.

Obviously, he should focus on the “MMA” keyword set. All of the keywords within that category are distinctly related to his audience. Not only does the data allow him to narrow his focus down to a specific niche, but it shows him which topics to write about, as well as several ways to make money.

Want to find out how? Keep reading, and I’ll show you how to turn your keyword research into traffic and a long-term revenue stream.

Next: Use Keyword Research to Find Post Topics That Score Big

Back to Keyword Research home page.