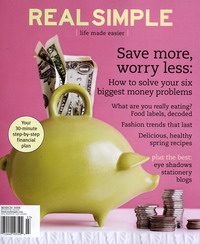 This post is by Jason of World Fitness Network.

I took a trip down to Borders Bookstore the other day and strolled by the magazine section. I’m not usually very thoughtful about these kinds of things, but something really hit me this time.

I looked at the hundreds of publications on display and felt impressed by the number of magazines that were thriving on topics ranging from running, to arts, and even decadent bathrooms.

Who in the world reads a magazine about bathrooms?

Apparently, there is a group of people out there who are passionately interested in reading about bathrooms. Otherwise, this magazine couldn’t profitably sustain itself. Not only does this market exist, but somebody has already learned to profit from it.

But does this epiphany (if you could call it that) about old media mean anything for us new-media types? The answer is yes; it means a lot for us.

In his book, The Innovator’s Dilemma, author Clayton Christensen explains why seemingly great companies often miss the boat and fail to utilize emerging technologies. Their problem is that they listen to their customers.

Yes, a large company listening to its customers can actually be a problem. When a company tries to satisfy its current customer base, the company usually focuses on improving its current product offering. Take the old VCR industry, for example.

Most of us were just happy enough to put a tape in the VCR and see it play. Of course, in order to please more customers, the VCR makers dutifully added more features to improve their product. We got VCRs with a programmable recording function, a complicated remote control, a nice clock on the front, etc.

Of course, none of us really had the time to read the 60-page manual that came with it, so we didn’t set the clocks, and all the VCRs kept blinking “12:00” day after day. In essence, the VCRs had already exceeded the primary needs of mainstream consumers. When a newer technology meets these primary needs in a better way, customers then migrate to the new standard and a paradigm shift occurs. See the illustration below.

Of course, digital video was quietly making its appearance in the background. Digital video got off to an awkward start with video players that used giant CDs the size of dinner plates.

A few people tried the new format, but some VCR providers were happy to continue improving their own, more-profitable business model. Over time, the digital format was improved, the DVD emerged, and we all know how the rest of the story goes. VCRs are now virtually a thing of the past.

A disruptive technology is something that offers a new feature, a cheaper way of doing things, or a more efficient form of delivery. Blogging is to each magazine niche what the DVDs were to analog video. Just as the digital video format slowly replaced VCRs, each niche of old media publications has the potential to be replaced by digital counterparts.

That means that every magazine that you now see on the shelves of a bookstore could potentially translate into a profitable niche for bloggers. Paper magazines likely won’t die completely (at least not right away), but what we’re talking about is the opportunities that new media provides us.

Bloggers may have already begun to make inroads in several niches, but many other niches are just waiting for bloggers to deliver their interests in a more convenient format. Just to give you an idea of the number of niches available, here are some examples of magazine titles that I saw that could represent profitable blogging opportunities:

In the end, every magazine on the shelves of the bookstore represents a potential niche that might be profitably replicated in the blogosphere. A blogger doesn’t necessarily have to reinvent the wheel when it comes to making money, but rather we should learn from the success of old media and apply that knowledge to this newer, more disruptive technology.

By looking at the old media, we can get a great sense for which niches can be profitable and what their associated products are. In those niches, we can often make money in the same way that old media publications do, such as the following:

So, which niche will you be disrupting?

About the Author: Jason is the author of World Fitness Network, a blog that helps you learn how to lift weights, live strong, and stop being such a fatty.

Previous article: Getting Writing Done: How to Stop Thinking About It and Write
Next article: The Ready, Fire, Aim, Reload Strategy for Social Media Success