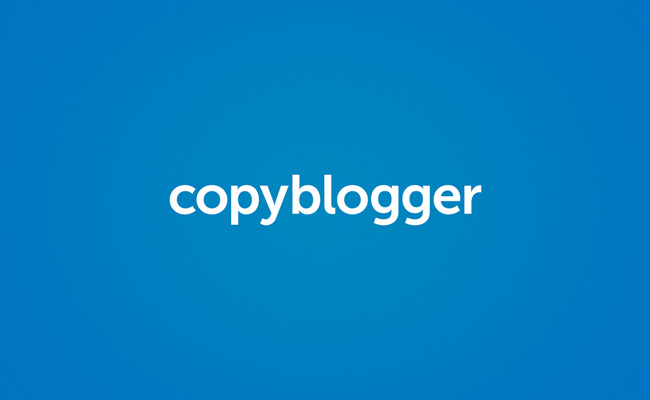 And as we all know, that’s pushing 60 in Internet years. So, we do what any aging icon does.

Actually, Copyblogger has undergone many redesigns over the years. Design is a big part of who we are as a company, so we pride ourselves on keeping our sites looking fresh.

But there have been two unwavering things that have been part of the Copyblogger look since day one. These two branding elements have been much too dear to ever change.

Red and black, plus copious amounts of white space, have been the Copyblogger colors since 2006. We’ve toned down the red in recent years, but it’s remained a foundational color.

Meanwhile, our product sites have all gravitated toward blue. Last fall I decided that Copyblogger should adopt the same coloring for a consistent brand experience along with StudioPress, Synthesis, Scribe, and this new thing.

That prompted me to state in a thundering voice (this is the best part of my job), “Make it so.”

Shockingly, Rafal decided to listen to me. And so it is.

Some things remain the same: MyCopyblogger and Authority are still red, to differentiate those areas that require registration or payment. In essence, everything that is “gated” is red, while the publicly-available areas of the site are the new blue.

The other thing that had never changed since the beginning was the Copyblogger logo. It’s always been very simple — just the neologism itself displayed in a particular font called American Typewriter.

It was a good fit for a site about copywriting applied to blogging, as Copyblogger began. But it’s a multimedia world and we’re a multimedia girl (so to speak), and we decided to go just a tad more modern.

Still simple. Still clean. But much more representative of what a modern content marketing publication should look like.

Hopefully you’re digging it as much as we are. Or maybe not.

Now, don’t think we’re naive over here. Some of you hate this. You think this is the worst, dumbest, most shockingly asinine thing ever, and you’re going to tell us so.

But if you really hate change, stay tuned. Just wait until you see what we do later this year. 😉

Previous article: 8 Smart Ways to Combine Blogging with Email Marketing for Best-Selling Results
Next article: The Simple Difference Between Being Heard and Being Ignored Online