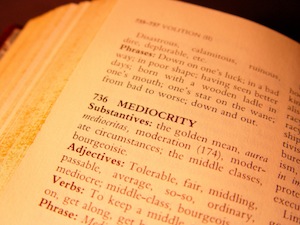 I’ve been blogging for six years now, and in that time I’ve noticed something — anyone can do it.

At first, I thought that this was a good thing. But then I realized that every good thing has a shadow side.

So here’s the downside of the accessibility of blogging: It makes the already-terrible writers much, much louder.

How can this be a good thing for you?

For too long, the bar has been set way too low with millions of blogs contributing to the noise without adding anything substantive to the discussion.

Our fame-obsessed culture has driven teenagers and baby boomers alike to create their own blogs — all for the sake of being heard. They’re taking up space with half-formed opinions and rants, and it’s given the blogosphere an infamously bad name.

But now, there’s a new phenomenon: The prolific, mediocre blogger.

This person actually understands the basics of SEO and social media and can attract a decent readership.

This probably drives you real writers completely nuts. But maybe it’s not all bad.

Here are three reasons why these awful wordsmiths can actually make you a better blogger.

Be honest: part of the reason why you hate these champions of mediocrity is jealousy.

Because if you’ve stuck around the Internet long enough, you’ve seen how even a terrible writer can build his own tribe.

And this pisses you off (and it should.)

But we need you to act, not sit back silently judging and mocking. Okay, you can judge and mock too, if you really want.

We need you to move, not lock up out of protest. We need your voice, and we need it now.

Now, if you have a good story or idea, you can share it, without having to know the right people or possess the right skills.

The days of the gatekeeper are ending.

This, for the most part, explains a lot of the frustration you’re feeling. There are terrible writers out there with nothing to say, and they’re saying a lot … very poorly.

They are stealing away your readers and making them dumber by the minute.

This is actually a good thing.

It forces you to up your game, to woo your followers back to your well-crafted blog. This is not a sprint to the bottom; it’s a marathon to the top.

And those who are truly excellent in their craft and committed to finishing will win in the end.

The fact that you’re an excellent writer irked by all this mediocrity may be an internal prompting to give back.

More people are blogging, because they recognize the value of building a platform. But they’re breaking the first rule of Copyblogger.

You can help them.

Look at it this way: If you’re really good at writing, you can help others become better writers. Instead of seeing these mediocre bloggers as a threat, why not view this situation as what it really is — an opportunity?

You could begin a writing consulting practice.

You could start coaching amateurs on how to stop sounding stupid and start writing like a pro.

You could help, instead of criticize.

The opportunity is there — do with it what you will.

What do you think? Does this just frustrate you further, or are there some legitimate lessons we can learn from mediocre bloggers?

Previous article: Why Split-Testing is Like Sex in High School
Next article: The Key to Effective Long Copy