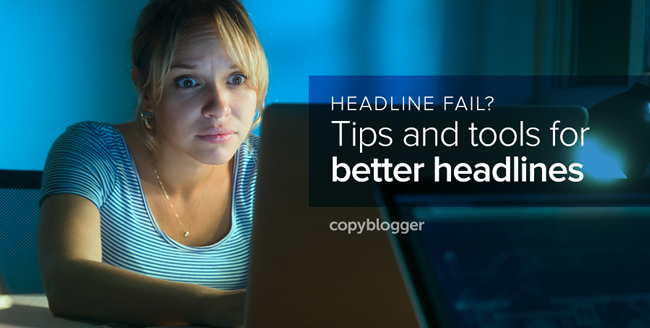 Let me ask you a strange question, dear web writer: do you ever lose sleep over your headlines — particularly the night before your content publishes?

At some point in the night, I’ll wake up and think:

“Oh my gosh, ‘rankle’ needs to come after ‘sunshine!'”

“Should Allen Ginsberg be in the headline? Will that turn people off?”

Here’s the funny thing: I’ve been at this for more than 15 years, and even though I’ve built up enough experience and knowledge to form a decent hunch about the effectiveness of my headlines, it’s still a guessing game.

An educated guessing game, of course. But there is a way to stack the headline odds in your favor.

How to stack the headline odds in your favor

Fortunately, we’ve got some great headline guidelines to work with. We can also look to our favorite media sites for inspiration. Here are a few of mine:

And don’t forget there are headline analysis tools available on the web that judge the emotional appeal of your headline. Here are two I’ve used:

All of these resources help us write better headlines, but how many of us go back and evaluate our headlines after they are published? Particularly the disappointing ones? What content marketing lessons could we learn?

That’s exactly what this post is all about. I did a postmortem on headlines that didn’t perform how I expected, including running them through the two headline analyzers above (which I didn’t do the first time around).

This was an interesting exercise. One I recommend you try yourself.

Some old truths were confirmed, but I also learned some new truths, too — lessons that will help you and me write better headlines … and even, possibly, sleep better at night.

Headline: The Worst Advice I’ve Ever Heard about Hustle

I was sitting on this idea about hustle for quite some time, specifically my frustrations with hearing the word every time I turned around.

And I was wondering if people were as annoyed as I was. Could I tap into that collective angst?

For those who don’t know, “I hustle” is just another way of saying, “I work hard.” Sometimes people say, “This is my side hustle,” meaning it’s work they do on the side.

But it can also mean to deceive: “I got hustled by that kindergartner.”

At the same time, I was toying around with a popular headline generator — one where you enter in three words and then it spits out a handful of ideas based upon a limited number of formulas.

After generating a number of unworkable ideas, I decided on the “worst ever” angle.

So, did it work? The answer is no, it didn’t. In terms of social shares, it’s easily my lowest-performing headline.

But how did it perform on the headline analyzers?

It didn’t even register on the Emotional Marketing Value Headline Analyzer. It gave the headline a score of 0.00 percent.

I ran it through three times because I thought there might be a mistake.

No mistake. It said:

Headlines with little or no emotional words rarely do as well as headlines with stronger emotional content. You can attempt to shorten your headline or use different words and analyze the new headline.

But I was confused. “Hustle” and “worst advice ever” seemed like emotional words.

Unfortunately, they don’t appear on this list of 50 trigger words.

And none of the words in the headline are on this list of the 5 most persuasive words in the English language. Perhaps I should have replaced “I” with “you?”

So, how did the headline perform on the CoSchedule Headline Analyzer? That was a different story.

I’m guessing one of the reasons it did well on the CoSchedule Headline Analyzer (68 out of 100) is because it’s short. It scored a B+ on word balance, which evaluates the percentage of words that are common, uncommon, emotional, and powerful.

The article got a lot of comments (43), so in some sense the content inspired those who took the time to read it. But I think I could have done better.

I took another crack at a headline and then tested it:

The big lesson here is that the word “hustle” probably has some baggage. Most people don’t want to be considered a “hustler,” so they cut a wide path around this article.

What do you think? Do you have a better headline idea? Test it and let me know how it performs.

Headline: Why a Legendary Album and a Viral Hoax Should Inspire You to Create Content That’s Worth a Damn

This was one of those posts where I had a lot to say and was really excited about the concept. The problem was I had two completely different ideas running through my mind that I needed to join.

How were they going to come together?

Eventually they did, but as you can see, the headline is a masterpiece in long-windedness.

There are a few things going for this headline, though. It’s positive (“Inspire You to Create Content”) with a little spicy qualifier (“That’s Worth a Damn”).

It’s also one of those “Why” posts, which is supposed to trigger people’s curiosity. But we were simply asking readers to process too much information with “a Legendary Album and a Viral Hoax.” The headline is 19 words and 95 characters!

So, what if I shortened it a bit?

Both options are still too long.

In this case, I should have gone in a totally different direction, something like:

Those two headline options are an improvement, but the big lesson here is to go short.

Do you have any ideas?

3. Polarize at your own risk

I love this headline, personally, because I got to use the uncommon word “rankle” instead of “piss off” (which doesn’t sit well with some people). But it also has some other things going for it. It’s short and a list headline.

So, why didn’t it provoke more interaction?

Probably because Copyblogger’s audience doesn’t include a lot of journalists. If it were published on a site dedicated to journalism, perhaps it would have provoked more of a response.

I should point out that this article was published the week we closed comments on Copyblogger and there was a string of discussion on Google+.

How did it perform in the headline analyzers?

The Emotional Marketing Value Headline Analyzer didn’t like it as much as CoSchedule did:

What would I change? I would probably take a different approach.

The original headline is negative. Almost a smear, with a sensational edge to it.

The big lesson I learned from this one is that it’s an article that draws a line in the sand. People take sides. I didn’t actually want to make journalists angry, though — I just wanted the article to stand out.

This was an announcement for one of our master classes in Authority.

It’s a short headline and it promises to offer a solution to a common problem: we all know we need to monitor and evaluate our website analytics, but doing it well is tricky.

I may have needed to change that scary phrase “site analytics” and talk about benefits. Possibly.

The CoSchedule Headline Analyzer said I should increase the uncommon, power, and emotional words — my headline wasn’t balanced. Here are two stronger possibilities:

These scored well even when I kept “site analytics” in the headline. So, the big lesson? Give the headline more personal appeal by dishing out uncommon, power, and emotional words.

Could you do better? Drop me some ideas in the comments.

5. Offer a downloadable asset for an added bonus

Headline: Against Attention: The Pre-Thanksgiving Manifesto

You should have seen me the day this published. I was stoked. I knew people were going to pound the share button for their favorite social media site with this one.

Almost a year and a half later …

What would have made me happy? I don’t know, something along the lines of the 13,000+ shares I got for the 10 Rules for Writing First Drafts.

But no, this article didn’t even break 1,000 shares. Let’s see if we can figure out why.

For starters, I wrote this “manifesto” because our obsession with getting attention frustrated me.

I also had a hunch there were thousands of people out there who were also frustrated. Now, I didn’t have any particular bitterness toward a single person when I wrote this one, but I’d seen a number of successful “Against [Blank]” headlines and wanted to try one.

Besides being Seth-Godin short and tapping into what I thought was a collective nerve, the other thing I thought this headline had going for it was the word “manifesto.” People like manifestos — brief, inspiring, anthem-like commitments to make the world a better place.

Finally, I was rooting for the underdog. The little guy! I was being sentimental!

And what better day to be against attention — that thing we could never get enough of and always wanted more of and kept us cranky when we didn’t have it — than the day before Thanksgiving, the day of gratitude?

The big lesson here? Perhaps shorten the headline to “Against Attention: a Manifesto.” More importantly, however, I’d offer a downloadable poster as well (which is probably one of the top reasons why “10 Rules for Writing First Drafts” was so popular).

And, of course, lower my expectations. Do you have any headline ideas for this one?

Use these 5 headline writing tips

So, let’s summarize the lessons we learned in this article.

In case you’re wondering, I did run this article’s headline through the headline analyzers. Here are the results:

So, do you have anything to add to this review? Any headline analysis tools you’d like to share? Any other lessons I should have learned? And do you lose sleep over your headlines?

Previous article: 3 Surprising Steps to Help You Think Outside the Content Marketing Box
Next article: How to Make the Move from Fearless Freelancer to Remarkable Digital Entrepreneur