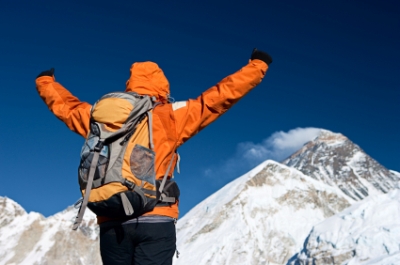 Let’s say you thought it would be pretty neat to climb Mount Everest.

One details a tough training regimen, spells out all of the financial costs, has a serious conversation with you about the risks, and gives you a complete list of the gear you’ll need to maximize your chances of a successful ascent.

Another tells you that since you go for a 20-minute run every day, you’ll be totally fine. Nah, don’t buy a bunch of fancy equipment. Just wear your flip-flops and a sweater.

Who’s doing you the favor?

There are plenty of people out there who’ll tell you that if you want to promote something — anything — you need to start a blog.

Don’t be intimidated, just jump right in. Start with a free account on Blogger, do a bunch of Google searches for good content, rewrite it with some cheesy automated blogging tool, and that juicy search engine traffic will just start rolling in.

Think that person is doing you a favor?

Or might they be sending you to the blogging equivalent of eternal rest as part of Everest’s permafrost?

Publishing a successful blog that supports your business goals?

So much easier than climbing Mount Everest.

Also, much, much less chance of dying or losing your nose to frostbite.

But there are times when you start out when it doesn’t feel easier than climbing Everest.

Does this mean you’ll never figure out how to run a decent blog?

Not at all. It just means you haven’t done your training. And that well-meaning person who said, “It’s really not that hard” was either full of baloney or forgot that when you’re starting out, damned right it’s hard.

So here are some ways to get over three of the toughest hurdles bloggers face. The sooner you get these out of the way, the sooner you can get to the fun part.

I’m not saying it’s going to be easy. But it’s also not as hard as it looks right now.

If the technology is killing you

I’ll admit it, I’m not a technology moron.

I’m worse. I’m almost a technology moron. Because I have mastered formatting a bulleted list in HTML, I believe that I can do anything.

This belief is incorrect.

I have been known to spend days trying to fix technical problems that a well-trained chimp could code up in 20 minutes.

Don’t get me wrong, it’s all learnable. Apply a little stubbornness and some focused attention and you will figure it out.

But is that actually what you should spend your time doing?

If you’re pounding your head against the technology and trying to make stuff work, allow me to suggest that you forgo your favorite treat for a few weeks (Starbucks, cute shoes, that iPad that’s been calling to you so sweetly) and hire someone to help you get this thing done.

There are plenty of people who will set you up with a WordPress blog for an impressively reasonable price. And there are thousands of other very capable folks who can help with the related stuff.

Eat ramen for a month if you have to, but get some help.

Then take the time you’ve saved and develop a simple, inexpensive product. Get it onto your now-functioning blog and pay yourself back.

If your reader numbers aren’t budging

The hardest, loneliest part of your ascent is right at the beginning, when you’re writing and posting and you’re not at all sure there’s anyone there to hear you.

The first training tip is to spend that time making your blog someplace worthy of all that traffic you want to attract.

If you got 10,000 visitors today, what would they see? Three posts about your cat, one about how you can’t figure out Twitter, and the “Hello, world” post that you never bothered to delete when you installed WordPress?

So while you still have some privacy and the utter freedom of anonymity, write some good cornerstone content. While you’re at it, get an email autoresponder up and running. Make your blog someplace worth going to.

Once you’ve got the place presentable, it’s time to get out there and do some guest posts. Make friends with people who blog about the same topics you do. Make intelligent comments on their posts. Follow the people they follow on Twitter. Be interesting and helpful.

Then offer to write some guest posts. Start with smaller blogs at first, then work your way to medium and then larger blogs.

Guest posts are still the best way to build your audience, find new loyal fans, and grow your subscriber numbers.

If you’ve run out of things to say

This is an interesting moment.

One possibility is that you’re midway up the ascent and you realize, “Oh crap, I actually never did want to climb Everest. I’d much rather swim the English Channel.”

The difference between climbing Everest and running a blog is that your attempt at the summit takes a day. (It needs to, because if you stay on the mountain overnight you die.)

Your blog is something you’ll think about every single day until the day you shut it down or sell it.

So if it’s not where you want to be, the right answer may be to shut it down now, or to radically change direction until it’s something you actually want to spend this much time on.

That’s why the experts all tell you that passion matters. Trying to write on a topic you don’t care about is really, really hard over the long run.

On the other hand, you may just be chickening out. You may need to deal with your own fear of failure, fear of success, or fear of mediocrity.

If it’s not one of those, it might be something very, very simple.

But you do have to write. A lot. (Even if you’re a podcaster or a video blogger, you need a smart, sharp script or outline.) The more you write, the more ideas will come. Sounds weird, I know, but it works.

So get off on your backside and do it.

About the Author: Sonia Simone is Senior Editor of Copyblogger and the founder of The Remarkable Marketing Blueprint.

Previous article: Johnny’s Copyblogger Wrap-Up: Week of May 17, 2010
Next article: Get a Great Deal When You Join Third Tribe Before June 1, 2010