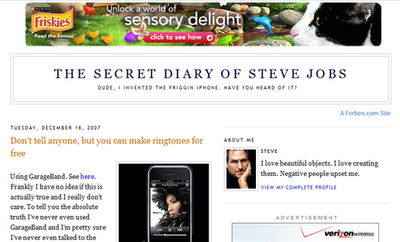 I was a little surprised this morning when, after I’d given a talk on business blogging, a seminar attendee asked if I’d seen the Newsweek article this week on why it’s impossible to make money with blogs.

“Guess I’ll give it all back, then,” was my off-the-cuff answer.

But out of curiosity, I picked the mag up on the way back to my room. If you haven’t seen it, Daniel Lyons, a talented blogger known for two years as “Fake Steve Jobs,” has an editorial that explains why none of us can make money blogging.

Fake Steve Jobs’ best month came with a traffic spike. His actual identity was revealed in the New York Times, sending more than a half-million people to his site in a single day.

His payout? For that half-million-visitor day, about a hundred dollars in AdSense earnings. For the entire month, he made $1,039.81.

Not quite what he was hoping for when he became a celebrity blogger and earned an impressive amount of attention and notoriety.

So if Fake Steve Jobs can’t monetize a blog, the rest of us are doomed, right? He worked hard, he created quality content, he had a terrific angle that went nicely viral. He was at the pinnacle, and he’s broke. So we will be too.

It must be true, he said it in Newsweek.

I learned the hard way: while blogs can do many wonderful things, making huge amounts of money isn’t one of them.

The expert weighs in

The article then tapped another source for a little expert credibility, Paul Verna, an analyst with eMarketer.

Verna’s take was that the real issue was “the lack of a clear business model that can generate substantial revenues.”

Verna’s on the right track, but we’re still a long way from the core problem.

If your business model is “I want to make money on the Internet,” you’re not going to get very far. The Internet is profoundly indifferent to your desire to make money with it.

Please notice that this does not mean that “there is no possible viable business model for any blog, other than a few fortunate exceptions that prove the rule,” which was the conclusion Lyons reached.

It just means that Fake Steve Jobs didn’t come up with a working business model, so he didn’t make any money.

Blogs are not television

I’ll confess, I have no idea how to monetize Fake Steve Jobs. His readers aren’t coming to his site to solve any kind of real-world problem, other than “how can I kill 10 minutes before my boss gets back from lunch?”

Television networks produce entertainment. They either make money from advertising or, for premium cable channels, from subscriptions.

If you want to watch Lost, you have to watch ads. Tivo dented that model considerably, but it still works well enough for now.

Advertising can work on some content web sites, but it usually works best when the reader is coming to the site to figure out a solution to a problem. If an ad presents a relevant solution to that problem, the ad can be effective.

For a complex bunch of reasons, advertising isn’t especially effective on most blogs. Unless there’s a terrific message-to-market match, ads on blogs tend to underperform wildly.

If you want to make money in the real world, solve real problems

It’s not about trends in advertising or trends in the blogosphere. It’s about returning to a fundamental marketing truth.

If you don’t offer customers something they dearly want, whether it’s to gain some great pleasure or escape some great pain, you’re not going to make any money.

It’s time for online business to grow up

For a long time, we believed that “online was different,” and that we didn’t need to accept any of the normal rules of business. We’d put something on the web and Magic Internet Dust would come along and make up for our total absence of business knowledge.

“Leap, and the net will appear,” was the mantra.

That sort of worked for awhile, but it doesn’t work now. If you don’t have a solid understanding of who your market is, how they’ll find you, and what problems you solve for them, it’s now “Leap, and the floor will appear.”

So focus on what does work now, and has always worked.

The real Steve Jobs sells beautiful, easy-to-use, loveable tools that make his customers’ lives better. If Fake Steve Jobs wanted to make money, he would have had to do some work to figure out how he could do the same.

Previous article: What a Cocky CEO Can Teach You About World-Class Blogging
Next article: Is Your Copy Less Than Fresh?