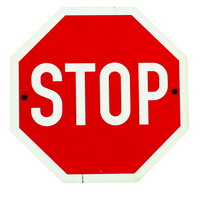 Sure, we talk a lot about the rules for writing great headlines here at Copyblogger, but what if you’re still doing it wrong? Are there a collection of common mistakes that bloggers and content marketers make with their headlines — mistakes that we can help you overcome?

Fact is, you can get all of the fundamentals right and still end up with a lousy headline. Sometimes, the only way to improve isn’t being told what to do… it’s being told what not to do.

With that in mind, here are a dozen don’ts to help keep you on track:

I know, I know. It’s hard to get excited about writing another “How to _______” or “21 Ways to _______.” Not because the templates don’t work, but because it just feels… tired. How are you supposed to keep your writing fresh if you’re using the same old shtick?

Simple: you broaden your source material.

When Brian published those headline templates, he never intended for anyone to believe they were the only templates that work. The best bloggers are always on the lookout for a new template to use in their headlines. You can get them anywhere, from the cover of Cosmo, to the front page of Digg, and from other popular bloggers.

The only time to experiment with new headlines is when you know you’ve truly mastered the fundamentals, and almost every headline you write is a hit. Until then, keep stealing the best ideas of others (just do it from a wider range of sources).

You also need to consider what your audience is used to.

For a while, longish magazine-style headlines stood out within the blogging niche because no one had used them before. Nowadays though, they’re common, and we’re starting to see the effectiveness decline. That’s why you see me experimenting with shorter versions of the same templates (examples here, here, and here).

Will the same be true for your niche? No, not necessarily. The point isn’t that long or short headlines are better. It’s that you need to zig when others zag. You still use the same principles and templates. Just modify them so that they stand out to your audience.

Brian has talked about this before, but it deserves bringing up again. Compared to clear, direct headlines, clever ones lose almost every time. Whenever you find yourself coming up with a pun, joke, or allusion, stop. You’re killing your blog post.

Again, sounds like less fun, but that’s the price of wanting a large audience. If you try to be clever, too many people are not going to get it. Sorry.

All of us have seen desperate headlines. It’s like the writer knows you don’t care what they are talking about, so they write the most off-the-wall headline that they can possibly think of, hoping that it will shock you into clicking. It’s sad… and ineffective.

But don’t look down your nose at it, thinking it’ll never happen to you. It will. Every time you write a post, ask yourself, “Is this headline begging for attention? Or does it demand it?” One day, it’ll be the former, and if you’re smart, you will stomp your newborn headline to death before anyone reads it but you.

You can write the best post in the universe, but if it’s about a topic your audience doesn’t care about, then it’s going to flop. The first step in writing any headline is considering what topics your audience is interested in, and then crafting the headline around that interest, not the other way around. There are no exceptions to this rule.

The tough part about growing a blog is that you have more than one master. Impressing your readers with a perfectly crafted headline isn’t enough. If you want any links, you also have to impress the other bloggers in your niche.

My advice: after you consider what your readers are interested in, take some time to think about what other bloggers in your niche will link to. Then craft your headline with them in mind.

The same advice is true for social media. If you want traffic from Twitter, StumbleUpon, or Delicious, you need to think about that audience when you’re writing your headline.

With Delicious, for instance, you’ll see a lot of list posts like 20 New Best WordPress Themes and 77 Ways to Cultivate Your Garden. That’s because Delicious is a bookmarking site, and list posts are inherently bookmarkable. If you’re targeting a post at Delicious then, using a list-style headline is probably a good idea. It’s what that audience is looking for.

What most beginning bloggers do though is the opposite. They write a post, and then they try to figure out where to promote it. Big mistake. You need to target social media from the very beginning, and the beginning is your headline.

We’ve all heard that you have to tailor your headlines to your audience, but what about also fitting that headline into your own personal voice?

In my experience, this is often the difference between a mediocre headline and a great one. I can spot a Naomi Dunford or Brian Clark headline without even clicking on the post — because it’s uniquely them.

Could your readers say the same about your own headlines? Or are you just rehashing the same old templates without adapting them to your personal style?

When struggling to choose a headline, you might be tempted to ask a friend for their opinion on which one would be best. But don’t. In my experience, friends usually pick whichever headline is the most clever or funny, not the one that’s best suited for your audience.

The only exception to this rule is if your friends are copywriters who know something about your audience. They might be able to give you some direction. Even then though, it’s still iffy. For the most part, writing headlines is something you have to learn how to do on your own. Get used to it.

Remember the first Harry Potter book, where Harry gets his wand?

Ollivander hands him wand after wand, allowing him to hold it only for a moment before snatching it back because the connection isn’t quite right. It’s only when Harry picks up the perfect wand that it bursts into magic, proving that he’s chosen the right one.

My advice: go for the magic.

The worst part about writing headlines is your failures are public. You’ll publish a post and there will be… nothing. No comments, no links, no adoring emails from your readers; just a fat, ugly headline sitting on your home page, proving to the world that you screwed up.

It’s embarrassing, but the good news is no will care as much as you. You need only remember one word to keep yourself moving: Next.

What I’m about to say is going to sound like hypocrisy, so give me a moment to explain.

Yes, I know we just finished a whole post about the importance of great headlines. Yes, I know we pitch them as the closest thing you’ll ever find to a magic bullet in copywriting. Yes, I believe you should study them with all the fervor of a Southern Baptist Bible scholar.

But will they make you famous all by their lonesome?

Because you see, writing a great blog post is like running a relay race. Your headline starts the race, but then it passes the baton to your opening paragraph, and its job is done. Sure, it’s important to start the race well, but if the next guy falls on his face, then how well the first guy did doesn’t much matter, does it? Every piece has to do its part.

So don’t expect too much from your headlines. They’re just the beginning.

Fortunately, we talk about everything else here at Copyblogger too. If you haven’t yet, you really should sign up for free updates for all of the crazy copywriting goodness we send out on a daily basis.

Oh, and follow me on Twitter too. You never know when I might get uppity and decide to remix some headlines for Copyblogger subscribers… (hint, hint).

About the Author: Jon Morrow is the Associate Editor of Copyblogger and Cofounder of Partnering Profits.

Previous article: Why You Should Buy Trust Agents (One Random Guy’s Opinion)
Next article: How to Get Past No