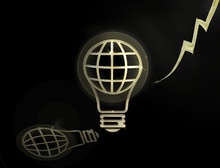 Let me tell you two stories.

For the first, we go back to Syracuse, Sicily, in the third century B.C.

Archimedes, a Greek mathematician, physicist, and inventor, was called before the throne to solve a difficult problem. The king had ordered a pure gold crown from the local goldsmith. But when the crown arrived, the king suspected the goldsmith of keeping some of the gold and replacing it with silver. The king asked Archimedes to help him prove it.

Later, while thinking about the problem, Archimedes went to a bathhouse, undressed, and stepped into a full bathtub, causing some of the water to spill over the side. Suddenly, Archimedes had the answer: he would take the crown and a weight in pure gold equal to the crown and dip each into water. If the overflow was different, the crown wasn’t pure gold and the goldsmith was nabbed.

The second story takes place in the United States a few decades ago.

A chemist, J. E. Teeple, was also working on a difficult problem. While thinking about the problem, he stepped into a bathtub, bathed, stepped out of the bathtub, dried himself off with a towel, shaved, then stepped back into the bath, bathed a second time, stepped out, and discovered that his towel was wet. Although quite clean, he still had no clue how to solve the problem he struggled with.

So he simply found another towel, dried, dressed, and got back to work.

The Myth of Creative Lightning (and Writer’s Block)

Because of the Archimedes “Eureka” story and other tales of scientists, thinkers, artists, and writers, we’ve learned to think that creativity is a mysterious, disorganized “AH-HA” experience, where half-crazed geniuses strap steel rods to their skulls waiting for lightening to roar down from the heavens and sizzle into their heads as fully-formed ideas. This kind of creativity does happen, though about as often as actual lightning strikes. When it does, it’s usually for simple problems for which there is a single right answer. Although dramatic, the image is misleading.

In real life, there is seldom a single right solution to any problem. And for most creations of merit, the hard work leading to the creation generally goes unnoticed. The creative myth leads people to waste time waiting for lightning instead of working hard and relentlessly, like our chemist friend, J. E. Teeple.

The creative myth will ultimately cause “writer’s block,” a “slump,” or “creative burnout.” Whatever the term, the result is the same: frustration, stress, missed deadlines, and poor quality work.

We need to reorient our view of creativity. We need to think “problem solving” rather than “creation.” So, let me suggest a step-by-step, practical process that works for just about any situation, including those times when you need a good idea for a profitable product, a new blog, an advertisement, or any big writing project.

Decide exactly what you want to accomplish. Don’t just say it or think it. Write it down. If you can, sketch out your problem using doodles, graphs, or other visuals to make it easier to understand. Be specific. Without a specific problem, you will never arrive at a specific solution.

Don’t be too selective, just scoop up everything in sight. Read, ask questions, explore, and let your curiosity roam free. You won’t use everything. But seemingly useless information can help you understand your task. The key here is to look at everything and focus on nothing. Get the big picture and leave the details for later. Do your research and start a detailed file on the problem.

Don’t go it alone. You need other points of view. Talk to fellow bloggers, customers, friends, clients, product managers, your hairdresser, the guy down the street, your mom. Stop people in the grocery store. Talk to colleagues, experts, librarians. Listen to everyone. Don’t look for justification of your ideas, just ask open-ended questions and let people have their say.

4. Add order to your information.

The next step is to turn your mass of information into something you can deal with. Organize everything you’ve collected. Boil down what you have into the essential elements. Sort and categorize. Don’t toss anything.

When you have everything in order, begin to brainstorm. See how you can use what you’ve collected. Don’t try to be practical. Don’t evaluate anything. Work as fast as you can. Write down everything. Try to generate as many ideas as possible, even if they seem silly or impractical.

6. Look for something to change.

Take some of your ideas and look for changes you can make. Ask relentless questions. “What about making it bigger? What if it were smaller? What can I substitute? How else can this be arranged? What if this were reversed? What could I combine this with? Is there another way to do this?”

In addition to collecting raw data, look at similar creative efforts. Look at blogs and Web sites. Dive into your sample file. Thumb through magazines related to your subject. Ask yourself, “How have I done this before? How have others done it?” Do this after you’ve come up with some of your own ideas, otherwise you could stifle a better way of solving your problem.

8. Forget about your problem for a while.

Tired? You should be. After a while, set everything aside and do something else. Take a walk. Golf. Nap. It’s hard to do when you’re fixated on finding a solution, yet it’s an important part of the process. The break will allow your brain to sift and organize subconsciously. You may get your best ideas when you least expect it – sitting in traffic, in your sleep, even in the bathtub!

9. Evaluate your ideas and keep only the best.

When you’re fresh, go over the ideas you’ve generated. Now is the time to play critic. Give thumbs up or down to each idea. List the pros and cons. Be merciless. Weed out all but the best. If you don’t like anything, or think you can do better, go back to brainstorming for a while. For a time, you might alternate between creating and evaluating.

10. Dissect your ideas to find flaws.

Go beyond mere evaluation. Attack your ideas. Use the scientific method of purposely poking holes in any idea to find weaknesses and inconsistencies. No idea is perfect, but if you find too many flaws, throw it out and move on.

Eventually, and perhaps painfully, you will have to choose a single idea. This can often be the most difficult part of problem solving because you’re afraid you might miss the “big idea.” Your instincts will tell you to keep brainstorming, but listen to your head, not your gut. If you’ve given the creative process a chance, it’s time to act.

In particular, you must avoid losing your objectivity by mulling over the problem too long. Sometimes, too much thinking will cloud your judgment. Creativity can be like a watercolor. Too many brush strokes will only produce a brown, ugly mess. Knowing when to stop creating and start acting is one of your most important skills.

Previous article: Happy Holidays from Copyblogger 2008
Next article: How to Use Twitter to Grow Your Business