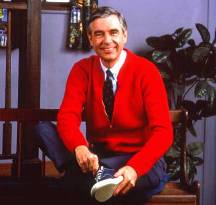 As bloggers, we put a lot of effort into telling our readers how to do things.

We believe that if we can just give them enough informative content that they’ll subscribe to our blog and never leave. We try to become the best teacher we possibly can, instilling wisdom down into short, usable posts that our readers can put into action right away.

But what if that’s not what they really want?

What if they don’t want a teacher to tell them what to do?

What if all they’re looking for is a warm and understanding person who understands what they’re going through and is willing to love them, no matter what?

Do you care how they feel?

Being a kid can be tough.

Everyone is always telling you to be quiet. No one wants to listen to what you think. Your parents make you go to bed, just when all of the fun is starting.

But not Mr. Rogers.

Fred Rogers made you feel like it was just you and him hanging out. He respected what you thought. He loved you, not because he had to (like your parents), but because he genuinely believed you were special.

After a while, you believed him. You felt special. You came back to the TV, day after day, just so you could feel that way again.

The best bloggers do that too. I read Copyblogger everyday for years before submitting this guest post, and it wasn’t just the information that kept me coming back. It was because, when I was done reading, it made me feel smarter, like I was one of the few people on the web who was truly in the know.

The more I think about it, the more I believe that’s a part of our job. Our job as bloggers isn’t just to inform our readers, but to make them feel special.

And yes, I realize it’s a little hokey, but I think Mr. Rogers can show us how. Listen to some of these quotes:

Lesson: For your audience to love you, first you have to love them. And they have to know it.

You know, I think everybody longs to be loved, and longs to know that he or she is lovable. And, consequently, the greatest thing that we can do is to help somebody know that they’re loved and capable of loving.

How much do you care about your readers? I mean, really care?

Mr. Rogers didn’t just talk to children on television. He also visited them in person. On a regular basis, he would go out into public and ask kids about themselves. He would bend down and look little boys and girls straight in the eyes, so they knew he was fully focused on them. Then they poured their hearts out to him right on the spot.

No, he wasn’t compensated for that time, and neither are we. Most popular bloggers spend inordinate amounts of time reading every comment, responding to every email, and watching what people say on Twitter. None of this has any direct effect on traffic, but what it does is build goodwill. One at a time, your subscribers find out that you really care, and it transforms them from readers into raving fans.

Lesson: Before you can be a leader, first you have to be a neighbor.

Our world hangs like a magnificent jewel in the vastness of space. Every one of us is a part of that jewel. A facet of that jewel. And in the perspective of infinity, our differences are infinitesimal.

Mr. Rogers didn’t pretend to be better than the children who watched his show. He didn’t point out how young and ignorant they were. He didn’t appoint himself as an expert and command them to listen.

Instead, he decided to be their neighbor: someone just like them, who knew what they were going through, and was ready to help in any way he could, not because they were defenseless children, but because that’s what good neighbors do.

The same is true for bloggers. If you really want your audience to listen to you, you need to take the time to tell them your story, pointing out the ways you’re similar to them and inspiring them through your example.

Lesson: Create an environment where it’s okay to be imperfect.

Most kids are terrified, not just of getting caught with their hand in the cookie jar or their parents finding a bad grade on their report card, but of the possibility that they’ll do something so bad that their family will stop loving them. They believe that love is only for “good” children, and they worry that they don’t deserve it.

This quote was Mr. Rogers’ gentle way of correcting (and comforting) them. Over and over again, he would tell them that, “I like you just the way you are,” not just because it sounded good, but because it was what they needed to hear. They needed to know that love wasn’t conditional, and that they were safe enough around him to make mistakes and learn how to improve.

I believe it’s important for us to create the same environment for our readers. You may not realize it, but lots of your readers are probably intimidated by you, believing that they can never be as good as you are, and they’re afraid to reach out to you for help.

It’s important to remind them that you like them just the way they are. Maybe you don’t have to tell them as often as Mr. Rogers, but take a moment every few weeks to mention how impressed you are with the creative ways they’ve implemented your suggestions and how are honored you are to have them as readers.

It’s a small thing, but it matters.

Lesson: Keep what works, throw out what doesn’t, but always know what and why.

Every day, Mr. Rogers honed his craft, paying attention to even the smallest of details.

He also stuck with what worked. “Won’t you be my neighbor?” wasn’t just the theme song for the show; it was a way to set the tone at the beginning of every episode, getting children ready to listen. And so he repeated it, show after show for years.

It’s our responsibility as bloggers to hone our craft in the same way. You should experiment, not just with headlines or post ideas, but with new openings, new closes, new pictures, and even new words. It’s how you improve.

And at the same time, take a lesson from Fred Rogers and don’t be afraid to repeat what works.

When will your opportunity be?

Every day that you communicate from the heart, you have a chance to change the world.

Back in 1969, Nixon proposed cuts to PBS, leading the Senate to hold a hearing that would decide the future of the station. And who do you think appeared before them and melted their hearts with words?

He wasn’t the CEO. He wasn’t a Washington insider. He wasn’t even well-known to the committee. Yet he showed up, spoke from the heart, and transformed some of the toughest, most hardened politicians in the country into raving fans.

It was the opportunity to create change that many of us dream of, and he seized it. But here’s the real question:

When will your opportunity be?

About the Author: Karl Staib writes about building stronger relationships and being happy at work: Work Happy Now! If you enjoyed this article, you may like to subscribe to his feed, follow him on Twitter, or read one of his most popular articles: How to Write a Career List.

Previous article: Check out this preview of the Scribe web-based application
Next article: The Critical Mistake that Keeps Bloggers Broke