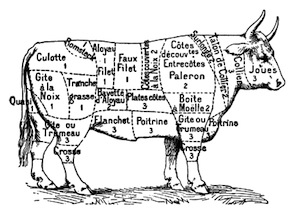 When the Head Chef dramatically walked out in the middle of Friday night service, a Sous Chef found herself in charge of the well-known and respected Manhattan restaurant.

In the following months, though she was very competent, and was working day and night, the restaurant’s reputation began to decline.

Fearing for her position, she made drastic changes to the menu. Then, a week later, she did so again. She reconsidered her seafood supplier. She negotiated with the General Manager for updated uniforms for the entire waitstaff. She replaced the tablecloths.

Despite these efforts, more and more patrons were walking out her door, shaking their heads in disappointment.

After a particularly bad weekend, she admitted that she could not see clearly the problems her restaurant faced, that she needed to somehow start over.

Without telling anyone, she snuck out of the restaurant, and began shadowing a prominent Chef in his neighboring kitchen several nights a week.

He was an aging culinary genius, and he didn’t like to talk.

So, she stood next to him chopping, rolling, grilling, and boiling. As the nights passed, she became consumed with the Chef’s technique, with his preparation, his orderliness.

Though she learned much, she could not find the secret, the one thing that would make the difference for her own dying restaurant. She continued to sweat, and observe, and worry.

Several weeks later — fearing that her current course of action was also futile — she thanked the great Chef, removed her apron, and turned to leave his kitchen.

“Ingredients. You don’t respect them.”

“How … what do you mean? I’m buying the best ingredients I can find. In fact, you and I share many of the same suppliers. I drive down to the farmer’s market every week to pick the finest produce available, by hand …”

“That’s not your problem,” he said, dropping a handful of diced onions into a bowl.

“Well then, what the hell is my problem!?”

“You want to make something breathtaking, something unforgettable, a plate that will send your patrons into fits of ecstasy,” he said.

“What you fail to see is that your ingredients are already breathtaking,” he said.

“A great Chef learns to restrain herself, to respect good ingredients. She works very hard to simply avoid screwing them up.”

He’d moved on to the whole pig he was breaking down, his blade passing through its shoulder effortlessly.

“There are a thousand ways to deface a beautiful tomato,” he whispered to himself, now gently holding the pig’s head in his hand.

She stood in the doorway of the kitchen for a moment, speechless. Then she turned, and walked quickly back to her own restaurant.

I’ve learned that any fool can write a bad ad, but that it takes a real genius to keep his hands off a good one. ~ Leo Burnett

Robert Bruce files unusually short stories to the Internet daily, from an undisclosed location near you. Good luck ...

Previous article: Here’s How Brian Clark Writes
Next article: How to Determine the Potential Size of Your Content Marketing Opportunity