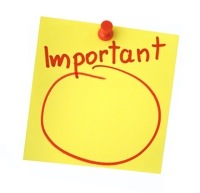 Imagine you’re going through your RSS reader and skimming the headlines as you sip your coffee, thinking about the busy day ahead.

You have an early presentation, lunch with Sue, a meeting at 2:30 and a call at 3:10. You promised the wife you’d pick up chicken for supper and then there’s that new DVD you wanted to grab on the way home.

You’re skimming the list and just one headline reaches out and grabs you.

Which of these headlines would tempt you to click through?

If you’re like most people, number three — the train headline – is the one that earns the second glance. You might pause. You might wonder what the situation was, or how the woman stopped the train. You’re probably pretty curious about the story.

And if you did, whoever wrote that headline was the winner of the moment. Because that’s the purpose of a good headline — to snag someone’s interest and keep them reading. They have to want to know what’s to come. They have to be curious enough or compelled enough or be interested enough to continue.

But stopping a train with bare hands? That’s pretty amazing. How did that happen? What happened? Who did it? And Why? Was she scared? Did she save someone’s life?

There’s a promise in that headline. The promise of something good to come.

We know there’s going to be a great story. We suspect we might even learn how to stop a train with our bare hands ourselves. We feel that we’ll be more entertained, more informed, smarter or better off in some way than we were before we began to read.

The NHL receiving an award is a story too. So are those relieved parents — they have a story. And the people on the plane? They have a story they’ll probably never forget.

But those headlines didn’t make a promise. They delivered facts. And worse, each gave the full story in just a glance. We didn’t have to read more to know what had happened. Nothing tantalized us. Nothing teased our interest or attention. We already had what we needed.

Boring headlines are a mistake. They don’t convey any benefits of reading more — not even entertainment value.

That train one, though . . . we’d discover a secret! Knowing how to stop a train might come in handy one day. It sure would be a great bit of trivia for the next party. “Hey, I know how to stop a train with my bare hands!” We’d learn something, get the scoop, maybe even impress people at the office. “Did you hear about that cashier? The one who stopped the train?”

If you want people to keep reading, then you need to promise them something in return. Don’t give it all away at the start. Do intrigue people with your headlines. They should tempt the reader, like irresistible bait.

Hook readers with a promise, and then close the deal with your content.

Previous article: How to Get Past No
Next article: Forget Everything You Know About Making Money Online… And Start Making Some