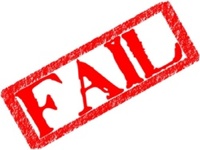 The other day, we published a headline that failed.

It happens to everyone, even those of us who consider headline writing to be a primary skill.

In this post, I’ll show you one way to avoid a headline fail when using one of the more powerful headline formats.

I’m talking about the “question” headline.

How to Effectively Use a Question Headline

As I said, the question headline is very powerful. When used properly, it creates an almost irresistible draw to prospective readers, no matter how busy they are.

Occasionally I’ll hear someone say that a journalism professor or writing coach told them never to use a question – whether in the headline or otherwise. This is terrible advice, because it’s only half correct.

The true rule is that you should never use a question that the prospective reader can answer with a no. If you ask that type of question, you’ve just failed… because you gave people a reason not to read your content.

The proper way to use a question headline is to ask a question that your readers can’t answer. In that sense, your question (like all good headlines) becomes a compelling promise to the reader that they’re about to discover something they didn’t know before, if only they keep reading.

Let’s look at examples of the right way and the wrong way to use a question, thanks to my own headline fail from earlier in the week.

How We Screwed Up a Question Headline

You know a lot of different people contribute to Copyblogger. And it’s probably no surprise that we assist with editing content from our guests in order to make it as engaging as possible.

One thing we do more often than not is tweak or rewrite the post titles (headlines). This works out to everyone’s benefit, since the stronger the headline, the more traffic to the post and more exposure to that specific writer.

So a couple days ago, we ran a post about backing up your claims with proof by Sherice Jacob. It’s a really solid post, so if you didn’t read it, you really should.

The original title of the post didn’t work as well as we thought it should, so Sonia rewrote it. After that, Sonia queues the post in WordPress for my final approval and publishing.

I look at the headline, read the post, and think, “This looks good.” The headline had a provocative edge to it, which should have helped the post spread rather nicely.

An easy way to gauge the response to a post in real-time is on Twitter. The number of retweets and clicks on the link (via bit.ly) will give you a general picture of how well a piece of content is doing relative to how things usually go day-to-day.

It quickly became clear that Sherice’s post was under-performing, and I couldn’t figure out why. And then it hit me.

A Failed Question Headline (And the Fix)

Here is the headline we published:

Are Your Readers Calling You a Liar?

Do you see the problem?

Taken literally, the answer to this question for most people is simply “no.” As ornery as blog comments can get, it’s likely most people have never been flat-out called a liar by a reader.

But because the content of the post makes it clear that you might not know if people are doubting whether or not you’re telling the truth, the headline wasn’t even a good match for the post. The real killer, however, was the ability to answer the question with a “no.”

Later in the day after discussing it with Sonia, we changed the post title to this:

Do Your Readers Secretly Think You’re a Liar?

Do you see why this is much better?

The question can’t be answered, because you have no way of knowing what your readers are thinking unless they tell you. And the use of the word “secretly” adds an additional compelling element that makes it clear we’re talking about something your readers aren’t telling you.

Learn from My Mistake

Even though the title was changed, most of the damage had been done. The email had already gone out, the post had been tweeted, and I have no idea if the title ever updated freshly in feed readers.

So it’s important to look for potential headline fails before you hit publish. Which is what I usually do, but everyone has off days.

And hey… it gave me something to write about for today. Hopefully you find some value in learning from my fail.

Because from now on, I’m covering up all my mistakes. 😉

Previous article: How Cross-Dressing Makes You a Better Blogger
Next article: Internet Marketing for Smart People