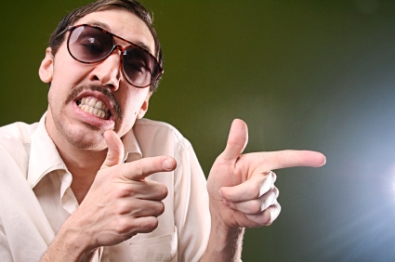 I keep running into this little conundrum.

One of the most important goals of copywriting is persuasion.

In fact, it’s kind of the most important goal, because if you’re not trying to get your readers to do something, you’re probably going to stop calling yourself a “copywriter” and just go for “writer.”

Writers can write without a call to action, but then writers also get to mull their words carefully while drinking tea. Copywriters can’t do that. They’re on deadline. They need high-octane espresso.

But if you write copy for long enough, eventually you’ll get to the point where you start to think, “I’m good at this. I can fill text with benefits and pain points all day long. I can write copy that will sell snow to Eskimos — but should I?”

It’s the Yin and Yang of marketing. On one hand, you want people to take a specific action, and the first stage of that action is usually to pull out their wallets.

But on the other hand, you don’t want to rook people into buying something they don’t need or can’t afford.

It can be hard to walk that line. If you learn to write good copy, it will be full of compelling reasons for the reader to buy. It will promise solutions to readers’ problems. It will remind them of their pain, and promise that your product will solve it.

It will do so for four easy payments and be endorsed by Jack LaLanne, who has got to be like two hundred years old by now and can still pull trains with his teeth.

Editor’s note: Jack LaLanne died in 2011, two years after the original publication of this post, and was an inspiring badass to the end.

But most of us aren’t snake oil salesmen, and don’t want to be. Most of us want to get readers to buy or take action, but we also recognize that the $3000 home-study firefighting course probably isn’t the best choice for the elderly widow down the street whose house is in foreclosure.

So where’s the line between selling well and selling too hard?

How to write ethical sales copy

Most people need a nudge even to buy things that would benefit them.

The mother who worries about her teenage son’s whereabouts? It’s probably in her best interest if you convince her to buy a cell phone for him. The struggling minimum wage worker? He could probably benefit if persuaded to take a course to be a paralegal.

In ethical sales situations, everyone wins. Your copy pushes the customer to do something he’s been neglecting, but that he needs or wants.

If you find yourself thinking only about your income and not about the true benefit to the customer, then congratulations — you’ve crossed over into Sleazytown.

As Lionel Hutz once said on The Simpsons, “There’s [stern voice] ‘the truth,’ and then there’s [smiling, happy voice] ‘The Truth!'”

If you want to sleep well at night while still doing your job, try to tell a bit less “technically correct but sort of misleading truth” and lean more toward “real person no-BS truth.” It may actually earn you bonus points for honesty.

Take, for example, my own social experiment. On my blog, I want to see just how far I can go toward telling the whole, unvarnished truth in my copy. To give you an idea of what I mean, here’s a particularly ridiculous excerpt from a post I wrote called You Can’t Do It:

I’m tired of people claiming that anyone can be a success. It’s not true. If I could find a turn-the-crank formula for success sufficient that anyone who used it would become successful, I’d be more rich than Bill Gates’ sophisticated one-liners.

Not everyone who tries will achieve what they set out to do — even under the best instruction and with the best of intentions. Many will fail. Many people will attempt to build something and will not. True fact of life, here, people. Everyone cannot do it. DAMMIT, EVERYONE CANNOT DO IT.

Now, that post was written to promote a product. I discussed the product’s benefits and sung its praises, but also pointed out the ugly. In short, after I wrote it, I could sleep at night.

The moral of the story? I ended up being the top-selling affiliate for that product.

This is the hardest, so it’s not for the faint of heart. I’ve had people ask me if they should buy X course or join Y program and then they’ll tell me their story.

Sometimes it’s obvious that they wouldn’t benefit. If they say they’ve bought every course and none worked, chances are this new one won’t “work” either, because they’re looking for a magic bullet.

In that scenario, I’ll actively try to convince them not to buy. I figure I can do without one more sale if it will allow me to look myself in the mirror tomorrow.

So, Johnny, should I invest in this product?

Ethics isn’t rocket science (and I know this because I’m considering working with a rocket scientist — true story).

All it comes down to in the end is telling the truth. Sometimes that’s harder than it sounds, but we can all remember how to do it if we try.

About the Author: Johnny B. Truant builds ethical websites and blogs of all sorts and does ethical consulting at JohnnyBTruant.com, while dressed ethically and eating ethical Wheat Thins. By contrast, he’s actually a real sleaze on Twitter.

Previous article: How to Be the Cool Kid (Even if You Weren’t One in High School)
Next article: Audience Conference: Ready to Get Serious About Social Media?