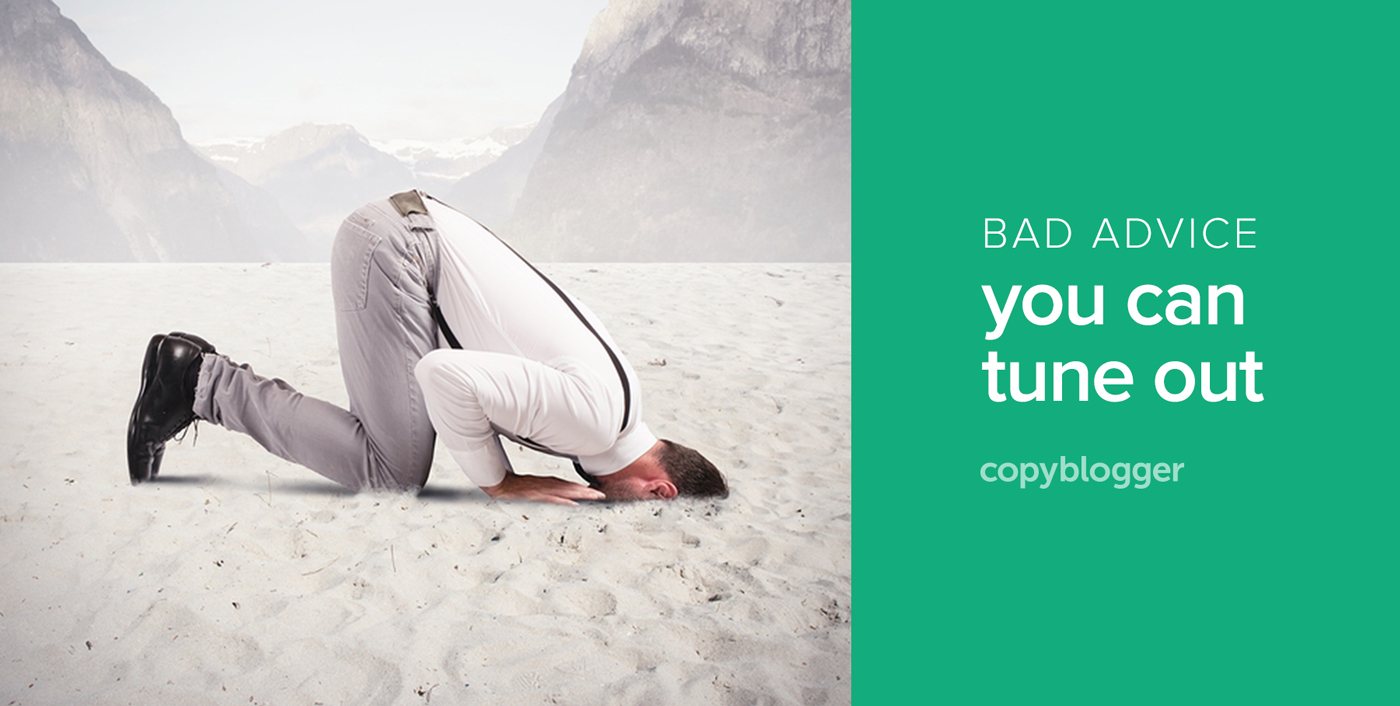 Ever heard the term negativity bias?

Briefly stated, it means that we’re wired to notice things that suck far more than things that rock.

I had a hilarious (and productive) example of this when I asked this question on Twitter:

(Apologies for the truncated words! #becauseTwitter)

I got more than enough replies to fill my podcast episode. In fact, I got so many good answers that I wanted to compile them for you here … in the spirit of encouraging you to leave unhelpful advice behind as we march forward into 2017. I asked our editorial team to chime in with their favorites as well.

And of course, I would love it if you’d leave a comment below with your favorite “not so helpful” bit of writing advice.

So here’s a compilation of bad advice, gathered from you.

Jason took a look at the oft-repeated advice that “humans now have a lower attention span than goldfish.” He discovered that it wasn’t supported by evidence (which shouldn’t really surprise us), and argues that too many content marketers are pandering to minds that aren’t as fractured as we assume.

One Tired Ema chimed in to echo that theme:

.@soniasimone Worst advice: Dumb down content. So many fields are complex/technical, but worth exploring (for business or edification) 1/

“Worst advice: Dumb down content. So many fields are complex/technical, but worth exploring (for business or edification) … There are middle ways of exploring complex subjects in intelligent but non-jargon language, such as a series of posts. … Oversimplifying OR skipping OR leaving the content ‘rarified’ does everyone a disservice. … Also ‘dumbing it down’ leads to its own special sort of bad writing, in my experience.”

Longtime friend of Copyblogger, Roberta Rosenberg, had this to say:

"Don't worry about even reasonably correct grammar. My market wouldn't know the difference."

Client:Tests show that exclamation marks perform well in subject lines. Can you use more of them? Me:Um…no. We're not yelling

Long blog posts cannot do well, bore readers, don't get shared, etc., and are therefore a bad practice by default.

Now: It must be stated that this is not license to publish walls of tiny gray text, unchecked by line breaks or an editor’s merciless Delete key.

If you have something complex to say, and it’s meaningful to your audience, go ahead and say it.

But the more complex your idea, the more discipline the writer needs to bring — to keep your language clear and direct, to format your work for readability, and to break it into manageable pieces as needed.

And TJ Kelly added this:

If you're a writer, you write EVERYDAY. https://t.co/xUzHys9y0a

So … isn’t that right? Don’t all the writing books tell us that we need to write every day?

I certainly won’t tell you not to. (I happen to write every day, although often it’s just a scrap of trivia or nonsense.) But no, you do not need to. The world is filled with fantastic writers who do not write every day.

The more important question is: how often should you publish?

If you do like the rhythm of writing every day, some of that time should be spent messing around. Goof around with ideas. Play with language. Write something that has nothing to do with your professional life.

How often you publish is an entirely separate decision, and should be treated that way.

Like so many business questions, the answer comes from your audience. Rae nailed it (she often does) with “nor does the world want them to.”

I know a content marketer who writes fascinating copy about soap. I’m sure there are content marketers out there (maybe you) who can write irresistible content about insurance, or tax law, or athlete’s foot.

Publish as often as you can be interesting.

If you have a boring topic, that’s going to be more difficult — but a good writer will rise to the occasion.

Your audience finds their own problems endlessly fascinating. Reading (quickly) about plumbing can be downright riveting if you have a plumbing disaster happening on the third floor of your house.

Find out what bothers your audience a lot. Write about that. With personality.

Write what you know

Again, like “write every day,” it’s not exactly a disaster. But it’s not gospel, either.

You may be able to craft something compelling from what you know. Or … you may have to learn something to be able to put solid work together.

For a long time, my version of this has been:

Know what you write.

Don’t publish material that’s half-baked, fake, misleading, or weak. Fact-check yourself. Be ruthless. Even fiction writers need to ground their work by absolutely knowing the world they write about.

Our own Kelton Reid added this:

“You can always know more, even if you’re writing about something you know like the back of your hand.”

Both Pamela Wilson and Robert Monahan offered this one:

I know a few excellent writers who work when they’re “inspired.” And I know many more who get to work consistently because they’re pros and that’s what pros do. (I’m in the second camp.)

Creative work is funny that way. The excitement and the inspiration, when they happen, often don’t show up until after the damned work is done. Sometimes they don’t show up at all.

Still, we put our fingers on the keyboard or the pen or the feather quill, and we get to work.

Should you edit while you write?

Surely this one is sacrosanct, right? Pamela wrote about it just the other day … it messes with your head to edit your work at the same time you’re drafting it.

This is usually correct. Except when it isn’t.

Our Editor-in-Chief Stefanie Flaxman put it this way:

“Experienced writers have learned how to tighten their sentences and paragraphs as they write so they optimize their chances of producing a strong first draft.”

I write a lot, and I have for a long time. It’s instinctive for me to prune out little ugly things as I go (I just did one there), and to shape and reshape as I work.

I also mark up my work in HTML as I’m writing.

In other words, I’m sort of a mutant.

More to the point, I’ve been doing this for a really long time. I think Stefanie nailed it with the word experienced, as well as that phrase “tighten their sentences and paragraphs as they write.”

My editorial brain doesn’t scream at me:

“Moron! Who are you to think you can write?! Stop that immediately!”

Should you aim for that? It’s totally up to you.

It’s not something I worked toward — it’s something that started to happen on its own as certain preferences about my style became second nature.

And that’s really the point of this whole exercise.

Almost any of these pieces of “bad advice” might be brilliant advice for you.

The most important piece of bad writing advice? Any advice that has you writing less, or with less enjoyment.

So if you need to throw away a revered chestnut of advice in order to actually write more, you have my blessing. 🙂

Got a piece of conventional writing advice that’s just never worked for you?