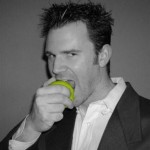 by  Johnny B. Truant

You know that “inner child” we hear so much about — the one that’s supposedly deep inside of all of us?

In the five years I’ve been a parent, I’ve realized that the notion of the inner child is more than just a neat psychological construct. It’s very nearly a literal thing. As we grow up, we don’t change so much as drape layer after complicated layer of adult emotion on top of that inner child. The child doesn’t vanish; he just gets obscured and filtered.

You don’t get an evolved, new mature being. You get Austin with fifteen blankets over his head.

Because that kid always remains at our core (and if you’ve ever caught yourself playing kids’ games with genuine enjoyment, you know that it does), our base motivations remain as well. They just get a little harder to see.

Kids ask for love; adults have complicated passive-aggressive relationships. Kids eat what tastes good; adults want the cupcake, but worry about it going straight to their thighs.

So you want to learn about marketing? Well, despite the complicated models and terminology that some of the gurus use, it’s actually quite simple. To see what works and why, all you have to do is look to my boy.

Make the customer “want that”

When the TV is on in our house, there are sometimes twelve sequential minutes of relative quiet. Then, as the commercials come on, we get a loud play-by-play as Austin begins talking loudly to nobody:

“I want that. That last thing. Not that; the thing before.”

It’s easy to dismiss this as incredibly annoying, but if you think about it, it’s actually really revealing.

Without all of those complex adult filters, kids are a conduit to something we don’t normally allow in the adult world: pure desire. There are none of the shoulds and should nots, no rationalizations and thoughts of what is proper or responsible.

That kid is still inside everyone. So the dead-simple lesson is this: Every sale starts with pure desire. Customers either “want that” or they don’t. The rest is just mental gymnastics to justify that core emotion.

Know what your customer really wants

Recently, Austin stormed through a six pack of kids’ yogurt so that we’d buy more, because each six pack had a tiny, ridiculous comic book inside. Yoplait could have filled those containers with shredded paper and they still would have gotten our dollars if Austin had his way.

Did he want the yogurt? Not so much. He wanted the comic book.

Similarly, we sometimes go to McDonald’s because of the dumb little toys they stick in Happy Meals. Or because of the giant playlands they have everywhere.

I have this experiment I keep meaning to try: I want to tell Austin that McDonald’s serves food, because I think he may be surprised to learn it. We don’t go to McDonald’s for the food. We go for the Batmobile that fires a small plastic stick at the back of my head while I’m driving.

Now . . . Wendy’s? We don’t go to Wendy’s. Their kids’ meal prizes are audiobooks on CD. Bleh. Same basic food, but none of what the boy really wants.

Interestingly, as I write this, I’m sitting at a Borders book store. There’s also a Barnes & Noble in town, but they don’t have as many big poofy chairs to sit in, and their ambient music is too loud. Apparently both stores have the same books, but I wouldn’t know that because I just come here to buy a latte and work in a comfortable chair.

Don’t lie to your customers

Cheers to McDonald’s for recognizing that small toys will get kids in the door. But jeers to our local managers for failing the “implied contract with the customer” test.

Recently, my wife and I were assaulted by a barrage of McDonald’s requests because the current pieces of plastic junk that the clerks were dropping into Happy Meals were Bakugan figures, which are Japanese balls that transform into things. (Don’t ask.)

My wife took Austin once and he returned angry, showing me a nondescript plastic Pancho Villa-like figure with a spinning sombrero. Later, I took him and despite the display for Bakugan, we again walked away with a bogus replacement — a miniature stuffed monkey.

Twice burned, Austin’s McDonald’s lust backed off significantly. And, seeing as our son had been lied to twice, my wife and I instituted a temporary boycott.

We often buy SpongeBob SquarePants macaroni and cheese. It’s terrible. For some reason, a complicated spongelike lattice doesn’t present cheese and pasta in a pleasing ratio. And yet Austin eats it and requests it again and again because SpongeBob is on the box.

I tested the limits of this adoration yesterday over dinner. Austin hates lettuce more than anything in the world, so I asked him if he would eat lettuce that had SpongeBob printed on the leaves and came with a free coloring book. He was all over it.

Then he got mad at me when I told him that such lettuce didn’t exist.

Of course, this only works on small children. Only kids are dumb enough to fall for such a simple trick, right?

You may not buy terrible macaroni because a cartoon tells you to, but you buy Nikes because LeBron James endorses them. Or you buy a phone you can’t actually talk on because it’s white with a silver Apple on it. And if you don’t do those things, then I’ll bet you were buying Pepsi because of Michael Jackson back before they lit his hair on fire.

You may be standing up and denying angrily that you do any of those things, but billions of advertiser dollars say either that you’re quite unique or that you’re mistaken. Maybe you don’t come out and say, “Ooh, Tiger Woods. I want that!” but it happens anyway — deep down, at the inner child level.

Like so many things, marketing can appear way more complicated than it is. But marketing is simple — not always easy, but simple. In fact, it’s so simple that you may be overlooking the reasons it works when it does, and why it doesn’t work when it fails.

If you have kids, look to them. See what they like, and why they like it. See what pushes their buttons, because it’ll tell you a ton. Kids aren’t dumb. They’re just adults without all of those complicated outer layers.

About the Author: Johnny B. Truant is giving a free teleclass called Attract Clients, Lose the Stress, and Do What You Love tomorrow (November 11, 2009) with his marketing veteran mother. She knows Johnny’s inner child better than he does, because she lived with it for eighteen years.

by  Johnny B. Truant

Are you familiar with the late comedian Mitch Hedberg? Very funny man, taken from us far too soon. More on…